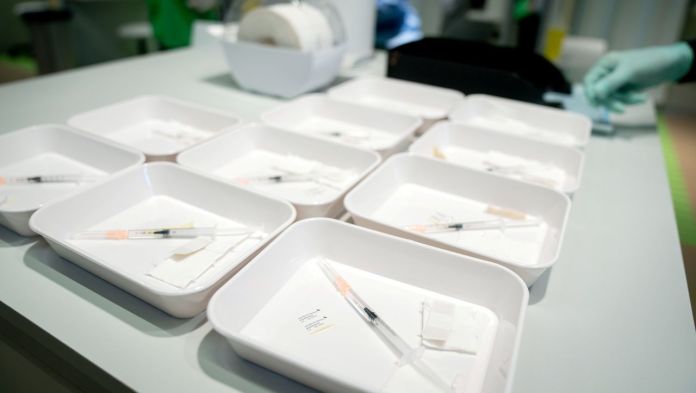 In politics there are increasing voices to approve the AstraZeneca vaccine for other groups in the population. “We should approve the AstraZeneca vaccine for the first three priority groups,” said SPD health expert Karl Lauterbach to SPIEGEL. “ The n millions of under 65-year-olds could be vaccinated quickly, including police officers, teachers and educators.” At the moment, vaccinations are only given for eight hours five days a week in many vaccination centers. “With the release for the first three groups, we could increase the workload to seven days a week.”
Lauterbach had already made a similar statement to “Bild am Sonntag”.

The  SPD politician advised against simply releasing the AstraZeneca vaccine for everyone. “

The n party-goers could be vaccinated earlier than young doctors,” he said. “We have to avoid that, it cannot be communicated.”

Bavaria’s Prime Minister Markus Söder also expressed concern about possible reservations about AstraZeneca. Before the committee meetings of the CSU he said: “I am clearly in favor of not abandoning the vaccine under any circumstances.” One must “make it clear that the vaccine is good and that it is easy to vaccinate according to the recommendations.” Söder spoke out in favor of »that teachers should be included in the corresponding priority«. In the long run it would not be justifiable “that massive amounts of vaccine are not inoculated, although it is there and could significantly improve the situation.”

FDP parliamentary group manager Marco Buschmann also spoke out in favor of immunizing teachers and day-care center staff with the vaccine from the Swedish-British company. “We should vaccinate teachers and educators quickly,” Buschmann told SPIEGEL. After all, they want to open schools and daycare centers as quickly as possible. “

The  possibility is there in particular because there is currently a comparatively large amount of vaccine from AstraZeneca.”
“People with disabilities as well as teachers and educators must receive a higher vaccination priority,” said FDP parliamentary group Vice Michael

The urer. “It cannot be that hundreds of thousands of vaccine doses are lying around unused because the state cannot organize the vaccination campaign.”
Green leader Annalena Baerbock said she hoped that teachers would move from priority group 3 to priority group 2.

The  vaccine that would be left in vaccination centers at the end of the day could be used to give priority to these professional groups and, for example, police officers.

Recently there had been reports of reservations about the AstraZeneca vaccine from several cities and regions. Numerous vaccination appointments in the vaccination centers would not be kept.

The  AstraZeneca vaccine is currently only given to people between the ages of 18 and 64 in Germany – there is a lack of data on the effect in older people. That is why the workers in nursing homes or intensive care units in this age group are now given this vaccine as a priority. Scientists believe that the reservations about the preparation are unfounded.

The  Hamburg CDU regional chief Christoph Ploß also called for a change in strategy. “We cannot accept that thousands of AstraZeneca vaccine doses are apparently stored untouched in vaccination centers. If you don’t want to, you’ve already got it, ”Ploß told SPIEGEL. “If people at risk do not want to accept the vaccination offer, we have to immediately release the vaccine doses for other citizens who are longingly waiting for protection, according to the priority list.”
Schleswig-Holstein has already announced that it will offer school staff a vaccination with the active ingredient from AstraZeneca in the coming weeks. Teachers, social workers and educators at schools as well as daycare workers should be vaccinated as a priority, said Education Minister Karin Prien (CDU) on Deutschlandfunk. As planned in Baden-Württemberg, the active ingredient from AstraZeneca should be used for this.

The  federal and state health ministers want to decide in the afternoon whether primary school teachers and educators should have a higher priority for vaccination. Health Minister Jens Spahn (CDU), Federal Minister of Education Anja Karliczek (CDU) and Family Minister Franziska Giffey (SPD) spoke out in favor.

Where vaccination takes place quickly and where it is slow

NCIS: McGee will be happy – fan favorite celebrates return after...

Events in Corona times: “We want to be able to survive”

Lockdown in Germany: What applies from today

Uwe Kemmer resigns from the supervisory board