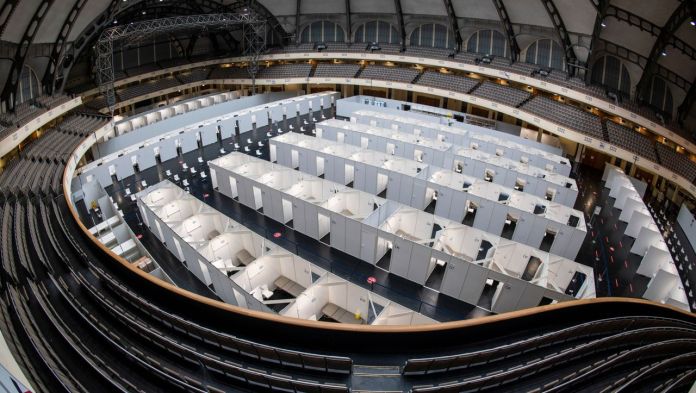 5.45 a.m .: In at least nine federal states, people who have not yet had their turn have already been vaccinated against Corona. This was the result of a research by the German Press Agency. Local politicians, clergymen as well as firefighters and police officers came into play, although they do not belong to the first priority group.

5.15 a.m .: Employer President Rainer Dulger has followed up with the criticism of the latest Corona decisions by the federal and state governments. “It’s a huge disappointment,” said Dulger to the newspapers of the Funke media group (Friday). “Once again, companies and employees have not received a clear, transparent, rule-based opening perspective.”

Dulger criticized that in future an incidence of 35 instead of the previously mentioned 50 should apply for the opening. What is meant is the number of new infections per 100,000 inhabitants within a week. “Politicians now run a massive risk of losing the population’s trust in the measures to combat the pandemic,” said Dulger.

A “closure scenario” was decided on Wednesday that fell short of the previous plans. Parliaments and social partners are not sufficiently involved in the development of the measures. «We need a post-corona strategy. We haven’t heard of that for months, ”added Dulger.

Chancellor Angela Merkel (CDU) and the heads of government of the federal states decided on Wednesday that the main Corona measures should be continued until March 7th. In particular, the trade may only reopen in 7 days if there is a regional incidence of 35 new infections per 100,000 inhabitants.

The re is an exception for hairdressers, who are allowed to open again in two and a half weeks if the hygiene requirements are strictly observed.

The  US government has signed a contract with vaccine manufacturers Moderna and Pfizer for 100 million additional corona vaccine doses each.

The  USA has a population of around 330 million. Two doses of vaccine are required per head.

Biden had already announced the purchase of the 200 million additional cans in late January, about a week after starting his tenure. He did not save on Friday with criticism of his predecessor Donald Trump. “He didn’t order enough vaccine,” Biden said. “He didn’t do his job to be prepared for the massive challenge of vaccinating hundreds of millions of Americans,” the Democrat continued. “America had no plan to vaccinate most of the country. It was a big mess, ”said Biden.

Trump’s government has aggressively promoted and funded vaccine development, which even Biden had previously praised. However, the government largely left the planning of the actual vaccinations, the associated logistical challenges and costs to the states, districts and municipalities.

Biden said vaccine makers Moderna and Pfizer have also committed to bring forward delivery of 100 million doses already purchased by a month by the end of June.

The  US pharmaceutical company Pfizer is working on the vaccine with the Mainz company Biontech.

Thursday, February 11, 11:16 p.m .: Over 107.5 million people worldwide have been infected with the coronavirus. More than 2.35 million died of or with the virus, according to a Reuters survey based on official data.

The  Czech parliament has rejected an extension of the emergency imposed due to the corona pandemic.

The  minority government under Prime Minister Andrej Babis was unable to assert itself by demanding that the state of emergency be continued until March 16. Alternative proposals with shorter terms also did not find a majority.

The  state of emergency that has been in force since October expires on Sunday. Among other things, it enables the government to suspend civil rights such as freedom of assembly across the board.

The  presidents of five administrative regions announced that they would step into the breach and declare a so-called “dangerous situation” themselves. In an emotional debate, government officials had warned of a collapse of the health system. “We go down in history as a state that withdraws its armed forces in the middle of a war,” warned Interior Minister Jan Hamacek. “

The  virus is aggressive, it’s a killer,” said Babis.

The  chairman of the opposition pirate party, Ivan Bartos, replied that many people were desperate and no longer trusted the government.

The  Czech Republic is particularly badly affected by the Corona crisis. Authorities reported 9,446 new cases within 24 hours on Thursday.

The re have been more than a million confirmed infections and 17,772 deaths since the pandemic began.

The  EU member state has around 10.7 million inhabitants.

Days after the swearing in: 26 dead in attack on government...

High intake of vitamin D can damage the heart – medical...