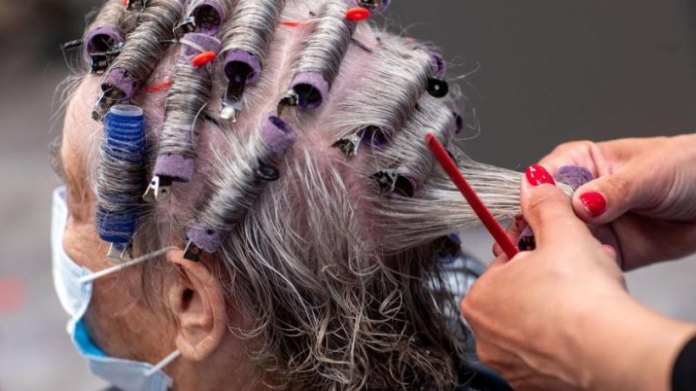 Corona lockdown: when can hairdressers reopen?

The  hairdressers in Germany have been closed since December 16.

The re is at least one date for an opening before the Corona summit.

Cutting the tips, trying out a new hairstyle, trimming the beard: all this is currently only possible in front of the bathroom mirror at home, because the Hairdressing salons remain because of the currently applicable Corona-Lockdowns still closed.


For the second time since the beginning of the pandemic

The  hairdressers are not allowed to open nationwide – a disaster for the salons. Undeclared work in particular has become a real problem from the point of view of combating pandemics, said the head of the Central Association of the German Hairdressing Trade, Jörg Müller. When is it possible to go to the hairdresser again, how is the industry doing, and what should be done if a new haircut is necessary?

Shortly before the Corona summit it is becoming apparent that the lockdown will probably be extended. But there could be easing. Answers to the most important questions.

Corona: when do the hairdressers open again?

The  current lockdown at least last – cosmetic studios and similar businesses will remain closed for the time being. According to information from our editorial team, the federal and state governments agreed on Monday that the lockdown would be extended.

“Business Insider” reported a continuation until February 28th. Relaxations But it should be available beforehand at daycare centers, elementary schools and possibly also hairdressers from February 15, according to the business magazine.

The  decision it will fall on February 10, when Chancellor Angela Merkel (CDU) and the country leaders discuss the further course of the lockdown – also against the background of the spread of the more contagious virus mutations.

Saxony-Anhalt’s Prime Minister Reiner Haseloff (CDU) has already rushed forward and demanded in the Berlin “Tagesspiegel”, after February 14th, again quickly Open hairdressers. “We have to see that many indispensable services become possible again, also in the interests of the people who work there.”

In Thuringia, meanwhile, an urgent application by a hairdresser against the current Corona regulation of Oberverwaltungsgericht rejected in Weimar:

The  hairdresser had stated that the measures would endanger her professional existence. But in the opinion of the 3rd Senate that is Prohibition of services close to the body in the current infection situation, it said in the statement of February 2. Even if the hygiene rules are observed, there is an increased risk of infection if the minimum distance is consistently and regularly undercut.

Should you cut your own hair in lockdown?

In view of closed hairdressing salons, sprawling manes and more YouTube guides the temptation is great to use scissors yourself. Professionals generally advise against this. If you still want to try it, you should definitely good scissors as recommended by Jens Dagné from the Intercoiffure Mondial hairdressing association. Under no circumstances should household or handicraft scissors be used, because poor quality scissors squeeze the hair and produce split ends after a further one to two weeks, according to the specialist.

The  cut should be as simple as possible. Experts therefore advise not to cut more than a few centimeters – because what’s off is off.

The  hair should be there dry because they appear longer when wet, which means that the new cut quickly becomes too short. You can find detailed instructions here: Cutting Hair At Home –

The se Tips Will Help With This

Can a hairdresser come home and cut hair in lockdown?

For many, the do-it-yourself haircut is too risky – but it is actually legally possible to simply get a hairdresser to bring home?

The  answer is very clear: no.

The  Corona regulations of the federal states provide that hairdressing services are prohibited. Failure to comply may result in fines.

Corona rules: Which hygiene regulations apply to the hairdresser?

Hairdressers in Germany had to close during the first lockdown from March 2020. After that, however, they were allowed to reopen temporarily – if certain Hygiene regulations have been observed. For example, in addition to wearing mouth and nose protection, all customers were required to wash their hair. Services such as eyelash and eyebrow coloring, shaving and beard grooming were also banned.

Hairdressers in the Corona crisis: how will the industry continue?

Many people worry whether the hair salon they trust will still exist after the Corona crisis.

The  fear is justified: According to a survey by the Central Association of the German Hairdressing Trade on the consequences of the Corona crisis, 70 percent of hairdressers will have in 2020 Sales losses of at least 30 percent feared. More than half suffered from severe or very severe existential needs.

With the action “Light on!” Hairdressers have now called on politicians to act again: From January 31st to February 1st, hairdressing companies across Germany left the lights on in their shops to draw attention to their difficult situation. “We are demanding support from politics as soon as possible in order to avoid the company dying,” said the head master of the Berlin hairdressing guild, Jan Kopatz, of the German press agency.

Read here: Because of Corona: Klier hairdresser chain has filed for bankruptcy

According to the Central Association of the German Hairdressing Trade, there are in Germany more than 80,000 hairdressing salons with over 240,000 employees and around 20,000 trainees.

Crafts President Hans Peter Wollseifer also insists that Economic aid Arrive at companies quickly and accurately in the Corona crisis. He told the German Press Agency: “Many companies got down to business as early as the first lockdown and almost used up their equity base.

The  savings are now almost completely used up. “(Raer / with dpa)

Traveling despite Corona – More on the topic

Extended bar lockdown: This is what the restaurant scene says about...

Volkswagen has to pay millions in taxes after voluntary disclosure

The market is fiercely competitive: e-scooter providers continue to expand

Trials in Stuttgart: stabbing, strangling, slain – review of the 2020...

Here every person infected with corona gets 560 euros – coronavirus