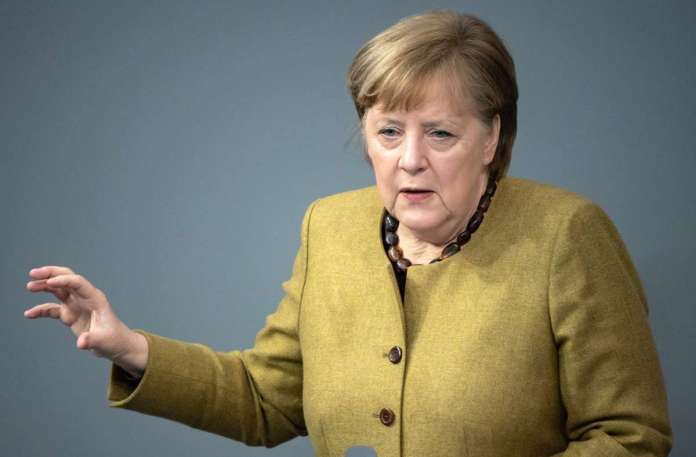 Steps, levels, packages – politicians are feverishly considering how the corona lockdown can be loosened further. Against all hopes, however, the number of infections is rising.

The re is also a setback in another important building block.

Berlin – Due to the spread of the more contagious variants of the corona virus, there is no end to the lockdown in sight in Germany. Chancellor Angela Merkel (CDU) spoke out on Monday in Berlin for a strategy of opening up various areas in “packages”. At the same time Merkel urged caution. Teachers and educators are now expected to be vaccinated earlier. However, another important building block in the fight against the pandemic, the planned free rapid tests, will likely be delayed.

Health Minister Jens Spahn (CDU) had recently announced again and again that from March 1, all citizens would be offered to be tested free of charge by trained staff with rapid antigen tests – for example in test centers, practices or pharmacies. Government spokesman Steffen Seibert said after a meeting of the Corona cabinet that this should only be discussed at the federal-state consultations on March 3.

The  postponement of the # quick tests is regrettable,” tweeted FDP boss Christian Lindner. “Testing, testing, testing is a building block for more freedom.

The  disappointment at the start of the vaccination must not be repeated. Why is it already working in practice in Austria that we are postponing? ”

In order to safeguard daycare and school openings, educators and teachers should be vaccinated earlier. According to a draft by the Ministry of Health, “people who work in childcare facilities, daycare and primary schools” move from the third to the second group in the vaccination sequence.

The  amended vaccination ordinance could come into force this Wednesday.

The  health ministers of the federal states spoke out in a meeting without dissenting votes for this new regulation, as Bavaria’s health minister Klaus Holetschek (CSU) announced.

Also interesting: How dangerous are the new coronavirus mutations?

In view of the concerns of a third corona wave, the Chancellor again pleaded for a cautious strategy. Opening steps would have to be coupled with increased tests and introduced wisely, said Merkel, according to participants in online deliberations of the CDU presidium. Merkel sees three areas for “packages” of an opening strategy: personal contacts, schools and vocational schools as well as sports groups, restaurants and culture.

The  share of the British variant is around 20 percent

Chancellery chief Helge Braun (CDU) said after this information that the mutations of the corona virus unfortunately just destroyed the good development. Government spokesman Seibert said the proportion of the more contagious British variant was 20 to 25 percent. “You have to assume that this proportion will continue to increase.” Opening steps have become more complicated as a result.

After about two months of closure and emergency care, daycare centers and elementary schools partially reopened in ten federal states on Monday. As a result, there is “a considerable increase in contacts and thus also in transmission risks,” said Seibert. Nobody wants to take back openings. “What we open, we want to hold out.” It is now important to look very carefully at how school openings change the infection rate.

Working group should deal with openings

In the next few days, according to the information from the CDU presidium, a working group with the head of the Chancellery Braun and the heads of the state chancelleries will meet on the subject of openings. She should prepare the next federal-state consultations on March 3rd. According to previous plans, stores could reopen on March 7th – but only in regions where there are no more than 35 new infections per 100,000 inhabitants within seven days for three days in a row. On Monday, this seven-day incidence rose nationwide from 60.2 to 61.0. She has been over 57 for more than a week.

The  chairman of the Prime Minister’s Conference, Michael Müller (SPD), said “Stuttgarter Zeitung” and “Stuttgarter Nachrichten”: “Even an R value well below 1 and a falling utilization of intensive care medicine will be important criteria for the next easing steps.” Culture and gastronomy should be can partially open if the federal states remained “stable over several weeks” below the seven-day incidence values ​​of 35 or 50.

From our plus offer:

CDU boss Armin Laschet, on the other hand, told these two newspapers (Tuesday): “A step-by-step plan that regulates which incidence values ​​have to be reached in order to reopen certain areas could bind us too much.” From the point of view of the North Rhine-Westphalian Prime Minister, it would help ” rigid automatisms ”not.

Within one day, 4,369 new corona infections and 62 further deaths were recorded.

When exactly teachers at elementary schools and kindergarten teachers will have their turn to vaccinate is unclear despite the planned higher prioritization. According to the Federal Statistical Office, around one million people are affected. According to Spahn’s earlier statements, vaccination group two, to which the teachers should belong, will come into play from April. Many chronically ill people and people over 70 are also gathered here.

“This is how we descend”: Profiboss Kind hopes that Kocak will...

Coronavirus: What we know about the Corona mutation from South Africa