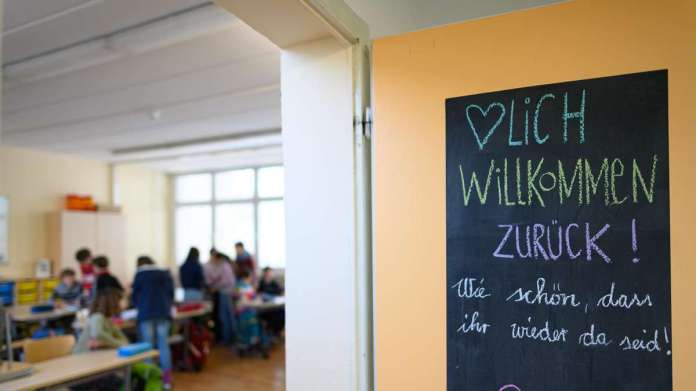 Today, Monday (February 22nd, 2021), elementary schools and daycare centers will open in ten other federal states despite the corona lockdown.

Update from Monday, February 22nd, 2021, 7:30 a.m .: In ten federal states open today after Corona-Lockdown again the Elementary schools. It is difficult to keep track, because how exactly Relaxations take place varies depending on the state.

Either there is Alternating lessons, i.e. business with half classes that come to school alternately, or fixed groups that should not meet. For the Hessian schoolchildren in grades one to six, for example, alternating lessons apply.

The  groups can swap for days or weeks. Which model of alternating instruction is then actually practiced is decided by the schools themselves.

In some federal states, however, primary school students had already been back to school – in Saxony, for example, since last week, in Lower Saxony since January. In the Next Starting today, more or all of the children may return, depending on the state. Older students: nationwide, they usually continue to do homeschooling.

Update from Sunday, 02/21/2021, 7:52 p.m .: Germany could Corona-Pandemie already brought under control in the fall. That says Gernot Marx, President of the German Intensive Care Medicine.

The  prerequisite for this is that all people in the country have actually been vaccinated by then.

Coronavirus: Teachers’ Association calls for stricter rules for school openings due to mutation

Compared to the “Augsburger Allgemeine”, the doctor said that this “really” presupposes “that almost everyone is vaccinate Let. ”Otherwise there would be the risk that in the meantime always new Mutants would arise.

Marx reckons that the British Mutation of Coronavirus gonna make sure the number of New infections With Corona in Germany will initially increase again and – just like Karl Lauterbach – is based on a third wave: “Our request is: Get vaccinated – also with AstraZeneca.”

The  German Teachers Association calls for Coronavirus mutations stricter requirements for school openings. It is “absolutely necessary to rely on caution and cautiousness,” said association president Heinz-Peter Meidinger of the Funke media group on Friday (February 19, 2021).

He added that the Mutation the coronavirus is the “greatest threat to a clear, reliable and sustainable school opening perspective”. According to the head of the association, only from one Incidence below 35 the full Face-to-face teaching may take place again.

In addition, the change from distance to alternate lessons should only be possible if the Incidence was below 100 for at least one week in the respective region and “and the trend is declining Infection numbers is stable “. To the School openings in Saxony and Saarland, he said it was “irresponsible” to introduce partial or even full face-to-face teaching now.

The  return to Face-to-face teaching however, defended the President of the Conference of Ministers of Education (KMK), Britta Ernst (SPD). This is good news for children and families. School openings meant for the students “social exchange with other children and a bit of relief for the families,” said the Brandenburg education minister to the Funke newspapers.

The  KMK observed “the development of Mutations with great attention ”, assured Ernst.

+++ Thursday, February 18, 2021, 3:50 p.m .: In Düsseldorf spreads the so-called British coronavirus mutation continue to look strong. As the news agency “AFP” reports, the proportion of apparently highly contagious increased Coronavirus-Variant by Thursday to more than 40 percent. According to the city, on Tuesday the share was still 27 percent and on Wednesday 30 percent. In the course of this, the seven-day incidence in Düsseldorf rose from 33.8 to 44.9.

Further CoronavirusOutbreaks in the North Rhine-Westphalian state capital were found on Wednesday in a daycare center and in a nursing home.

Federal Minister of Health only had it on Wednesday Jens Spahn (CDU) announced that the share of in Great Britain discovered variant of the Coronavirus the number of infections in Germany is now more than 22 percent.

Update from Thursday, 02/18/2021, 6:45 a.m .: Of the Apothekerverband North Rhine expects that the Corona-Case numbers will rise again in the coming weeks. In addition to the mutation, the expansion of the corona tests will also lead to this, said Thomas Preis, Chairman of the North Rhine Pharmacists’ Association, of the “Rheinische Post” on Thursday (02/18/2021). “If it is tested, we will also have more cases,” he clarified, referring to one suspected Dark figure with corona infections.

Furthermore, Preis pointed out the pollen count, which will soon set in increasingly. That’ll lead to allergic reactions with that Corona-Symptoms could be confused. That could also drive up the number of corona tests.

The  city of Flensburg in Schleswig-Holstein has its own Corona-Measures tightened. As reported by Norddeutsche Rundfunk, a night curfew is being introduced. In addition, a household in Flensburg will no longer be allowed to meet another household in the future. “I know this is another restriction on people’s freedom. But we simply notice that the measures taken so far are not sufficient, ”said the Schleswig-Holstein Prime Minister Daniel Günther (CDU).

In Flensburg, 181.9 people per 100,000 inhabitants were infected with the corona virus in the last seven days. According to the mayor of Flensburg, the new ones CoronaVariants responsible for well over a third of the infections in the city.

The  immunologist Michael Meyer-Hermann warns of the more contagious Corona-Variants. “We are currently facing at least two pandemics,” the researcher told the Tagesspiegel.

Since the new Corona-Variant is not yet dominant, “in total, it still looks like falling case numbers,” said the physicist and mathematician who heads the systems immunology department at the Helmholtz Center for Infection Research. It could be, however, that the currently targeted incidence of 35 cannot be achieved with the current measures. “That makes it clear that any form of openings At the moment there is a high risk of not being able to achieve the goals set. “

The  Robert Koch Institute (RKI) * states in new data that the proportion of those first discovered in Great Britain Coronavirus-Variant rose from six percent to 22 percent within two weeks.

The  more contagious variant is also spreading quickly in Germany. That shared Federal Health Minister Jens Spahn (CDU) on Wednesday in Berlin. “We have to expect that the variant could soon become the dominant one for us too,” said Spahn. With all opening steps from the Lockdown great caution should therefore be exercised.

Still referenced Spahn that the Corona infections* decrease overall at the same time. This shows that the protective measures are working and is “encouraging so far”. At the same time, however, the minister dampened expectations of rapid openings.

The  ways out of the lockdown would have to be followed “with very special caution”. It is right that the daycare centers and schools should first open more strongly again.

Corona in Germany: Opening plans can continue to be based on incidence

However, it must now be checked every day what the dynamics of daycare and school openings have changed. Spahn said he had nothing against opening plans that came after Incidence values the virus spread. But everyone should be aware of the importance of mutations. Every two weeks, “where we stand” must therefore be checked.

The  people in Germany Spahn urged to adhere to the protective measures and to be careful. “We make the difference – every day.”

Corona-News: Effects of the Corona mutations on Germany are still unclear

The  proportion of the others, also considered to be more contagious Mutation, which was first discovered in South Africa, is meanwhile at one and a half percent, explained Spahn.

The  RKI will publish a report on this later in the day. Until now it is still unclear how the mutations affect the handling of the Corona-Pandemie in Germany. (Sandra Bohm) * fr.de is part of the nationwide Ippen digital editorial network.

Why the Nvidia TGP is so important: Some laptops with GeForce...

Overall, ZEISS can look back on a good 2019 financial year

From Japan to Norway: plans to fight the pandemic S-Bahn disruption in Frankfurt: delays and cancellations on almost all lines

Brexit: the ruin of British music