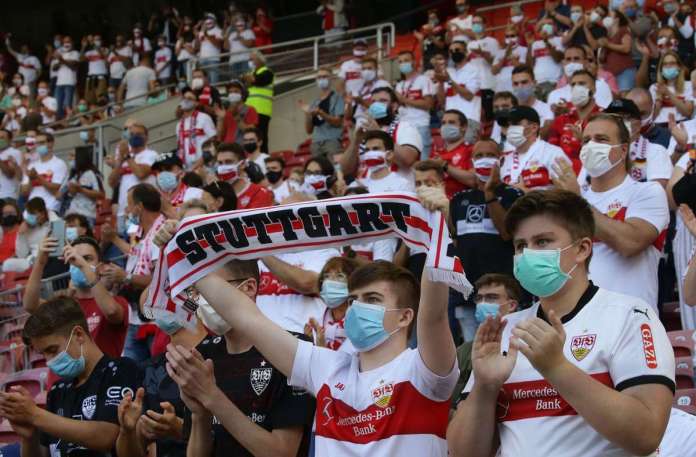 The  Bundesliga plays in front of empty ranks – concerts do not take place.

The  corona measures of politics currently give little leeway. With a three-stage plan, however, major events should be possible again.

Berlin – According to a proposal from science, sport and culture, despite the corona pandemic, spectators at major events should be possible again with a three-stage plan.

The  paper that is to be presented on Monday is already available to the German Press Agency.

The  approach makes it possible to transport “mass events with reasonable effort and top events with relevant additional investments back to the spectators and guests,” it says.

The  “Bild” newspaper had previously reported.

The  paper is supported by 20 scientists as well as numerous associations and organizers, including the German Football Association (DFB) and the German Stage Association.

No food is sold

The  guideline initially provides a “basic concept”. In the case of closed rooms, a hygiene, ventilation and infection protection concept should therefore be required for each event location.

The  paper assumes a cast between 25 and 30 percent. In addition, personalized tickets, which are checked together with the ID, and medical masks should be mandatory.

The  sale of food or beverages is waived, there are minimum clearances with correspondingly empty rows of seats.

In the outdoor area, an occupancy rate of up to 40 percent is then possible. Mask compulsory should apply up to the seats, with more than 1000 visitors there should be no alcohol.

The  basic model for indoors and outdoors does not differentiate between whether visitors are vaccinated or not.

Any increase beyond that requires an “individual special concept”, the 21-page paper also says. A hygiene concept with high standards should “prevent uncontrolled” growth “of hygiene concepts”.

The  variant named in the paper “maximum model” requires a test strategy with digital support from contact management, among other things. Antigen tests before each event would also be mandatory.

The  paper assumes that access is then possible up to the full occupancy.

Supporters include experts from the fields of infectious diseases and virology, ventilation technology, health economics, and sports, cultural and legal sciences. Which shops are allowed to open and when? That changes from Monday when shopping

Down, up, down, up – Graphic: Mobility in Germany

The EU and USA are suspending mutual punitive tariffs

Train traffic in Germany: Deutsche Bahn is putting a record amount into the route network – economy

Germany fails in the fight against Corona: failure made in Germany

Aheln: 34-year-old executed on the street: police are looking for clues

Germany in the share boom: Securities purchase increases during Corona

Victory against Sturm: The LASK is oriented upwards Uncomfortable week with sleet in Berlin and Brandenburg