The  corona pandemic has brought unimaginable suffering to the United States. More than half a million Americans have died from complications from the virus. President Biden makes remembrance of the sacrifices and gives hope for better days.

The  flag over the White House flies at half-mast in the cold winter air, and hundreds of candles on the south side of the building are a reminder of the countless corona deaths in the USA. President Joe Biden, First Lady Jill Biden, Vice President Kamala Harris, and her husband Douglas Emhoff bow to the victims. With their heads bowed they observe a minute’s silence on the south side of the White House, their hands clasped as if in prayer. Shortly thereafter, a military band played the song “Amazing Grace”.

“Today we mark a truly gloomy and heartbreaking milestone,” said Biden in a speech on the evening immediately before the commemoration. According to data from the University of Johns Hopkins, the United States had passed the threshold of more than half a million corona deaths.

More US casualties than in the bloodiest wars

“That’s more Americans who died in a year of the pandemic than in World War I, World War II and the Vietnam War combined,” Biden said. “That is more lives taken from the virus than any other country in the world.”

However, the president warned Americans not to be dulled by the “unimaginable” number of victims. “We have to fight against becoming deaf to suffering. We have to fight against seeing every life as a statistic,” demanded Biden. “We have to do this to honor the dead. Just as important is caring for the living, those who have been left behind,” said Biden. Every corona death had family, friends and an “extraordinary life” that ended too soon.

More than 150,000 victims since the beginning of January alone

To commemorate the dead, Biden ordered flags to be lowered to half-mast across the country. This applies for five days at public buildings, military bases, and US government diplomatic missions abroad. In the House of Representatives, the deputies rose to a minute’s silence.

The  winter months of the pandemic were devastating in the United States. Since the beginning of January alone, more than 150,000 people have died after being infected with the coronavirus.

The re are now 28.2 million confirmed infections in the country with around 330 million inhabitants.

Recently, however, there has been hope that the situation will improve soon.

The  number of new infections every day fell from more than 200,000 at the beginning of January to less than 70,000. And the vaccination campaign is also progressing: So far, 44 million people in the USA have received the first vaccination, around 19.4 million people have already received both vaccine doses, according to data from the CDC.

Biden has been putting massive pressure on the vaccination campaign since he took office a month ago.

The  USA will now receive around 600 million doses of vaccine from manufacturers Moderna and Pfizer / Biontech by the end of July, which would be sufficient for all adults in the country. According to some experts – if everything goes well and only a small proportion of Americans refuse to be vaccinated – the worst of the pandemic could be over by autumn.

“This country will laugh again, this country will have sunny days again. This country will experience joy again,” Biden said confidently. “We’ll get through this, I promise you.” Biden did not give a specific point in time when he expected a return to a certain normality in the country. However, he was confident that the situation should improve significantly in the second half of the year 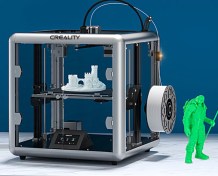 Creality Sermoon D1 – All information about the new 3D printer