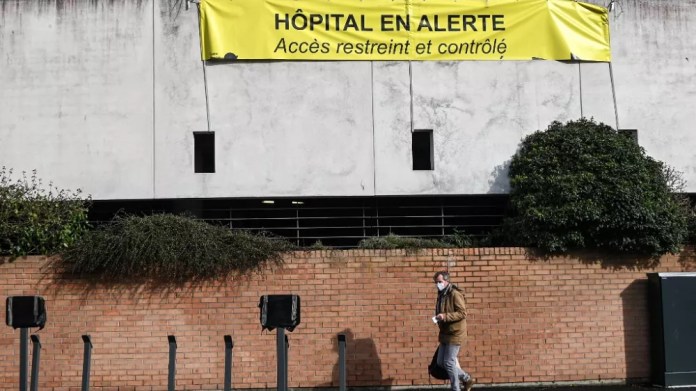 On the wall of a hospital in Dunkirk (French: Dunquerque) in northern France it says: “Hospital on alert”. After the Corona hotspot Nice, the situation in the 90,000-inhabitant city of Dunkirk on the Ärmerl Canal in France is worrying.  The  7-day incidence here is around 900 per 100,000 population – mainly because of the spread of the British mutant.

The  mayor has asked for support from the central government in Paris.

The  situation in the greater Paris area is also being observed with concern, because the number of patients treated in hospital for Covid-19 has increased in recent days. Martin Hirsch, the head of the capital’s state hospitals, said that around 750 intensive care beds are now occupied with Covid-19 sufferers, compared with around 700 a week ago. You are on a plateau of the patients.

A different mood in London – here people are hoping to go out in the evening again, because Prime Minister Boris Johnson has promised the light at the end of the tunnel with his exit plan from lockdown.

The  hopes were made possible by massive vaccinations.

Boris Johnson stated, “We no longer have to rely on lockdowns and restrict our behavior and put our lives on hold, with every day that goes by the vaccination program creates a protective shield around the entire population. We are now on a one-way street into that Freedom on the move. ”

Schools in England are slated to reopen on March 8th.

The  lockdown should be completely over in June.

The  UK health authorities report that the risk of getting seriously ill with Covid-19 for those over 80 years old has been reduced by at least three quarters after vaccination with Biontech-Pfizer or AstraZenea.

Slovakia – a country with 5.5 million inhabitants – currently has around 100 deaths a day. one of the highest death rates from Covid-19 worldwide.

The  Slovak foreign minister called on the other EU states to help his country with vaccines.

“We live in difficult times.

The  vaccine aid comes too late for those who are already ill, but bilateral help from our partners would be an encouragement for the people and would be very welcome.”

Halo Infinite: is it that late? Release date turned up...

Joy about the first vaccinations against Corona

Thomas Gottschalk: “I wouldn’t touch a guest again without having them...