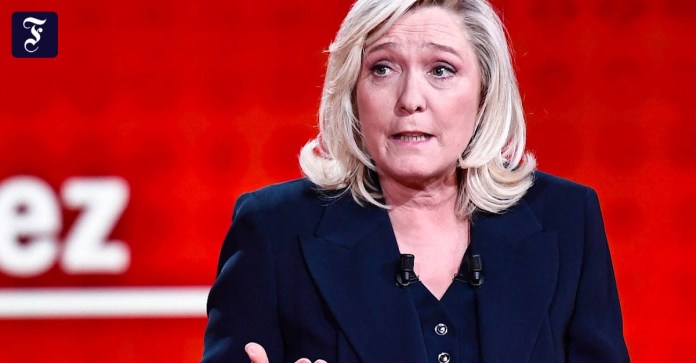 Er dream of a runoff election without Marine Le Pen, the French government spokesman Gabriel Attal has just announced.  The  reality is different:

The  52-year-old presidential candidate has the best prospects of qualifying for the decisive election round next spring.

The  corona pandemic has destroyed the last vestiges of the optimistic mood that Emmanuel Macron spread after moving to the Elysée in 2017.

The  health crisis reveals how many French people share Le Pen’s ideas of foreclosure, protection and a return to the nation.

The  polling institute Opinionway carried out a large-scale study in France, Germany, Italy and Great Britain on behalf of the research center Cevipof (Sciences Po) to examine how the pandemic has affected public opinion – with some worrying results for France. “

The  health crisis has further intensified the structural political crisis of confidence in France,” explains political scientist Bruno Cautrès from Cevipof in an interview.

It started with the “yellow vests”

Even the “yellow west” protests had exposed the crisis of representative democracy. Since then, Macron has not been able to reduce doubts about democratic functioning. In contrast to the executive leadership in the comparison countries, the French president largely bypasses the parliament. Important decisions are made in the small circle of the Corona Defense Council.

The  deliberations are under defense secrecy, even cabinet members have no access to the minutes of the meeting. In addition, France has declared a health emergency that further strengthens the executive branch. 55 percent of French respondents in the survey criticize the democratic functioning of their country. Among the German respondents, it is 32 percent.

The  goal of an ethical and moral renewal has been missed since the change of power of Macron’s governments. 65 percent of the French consider those politically responsible in their country to be corrupt. Among the German respondents, it is 42 percent. “France has been experiencing a crisis of confidence for a good decade.

The  hope that Macron would strengthen confidence with a renewal of the political staff has not been fulfilled, ”says Cautrès.

However, the pandemic has helped the French to place more trust in public institutions such as hospitals and vaccination centers. Overall, however, the results of the survey are worrying for Macron’s election strategy. Only a minority of the French would like to see greater opening and integration into the EU and the globalized market economy. 44 percent are in favor of “protecting themselves more from the world”. 19 percent want a wider opening. Among the German respondents, 51 percent advocate economic cosmopolitanism.

Le Pen does not let himself be disturbed

In other areas, too, Le Pen’s course corresponds more closely to the perception of her compatriots. 62 percent of the French see Islam as a threat to the republic; the comparative values ​​for Germany are missing here for reasons not mentioned. Only recently, Interior Minister Gérald Darmanin criticized Le Pen on a television program for being “too lax” in dealing with Islamism. Le Pen did not let himself be disturbed. She has admitted to being too aggressive in the television duel against Macron in 2017.

She is obviously betting that the French have already identified her as a champion against Islamization, while Macron still has to sharpen his profile. In its first reading, the National Assembly passed the “Strengthening Republican Principles” law, with which Macron wants to address the concerns of his fellow citizens about “Islamist separatism”. A year before the election, less and less of his compatriots are enthusiastic about the president’s Europe-friendly course. Even in the European elections, Macron’s party was behind the Rassemblement National Le Pens.

Flood of parcels – Swiss Post warns of a second shutdown...