On Tuesday, large cryptocurrencies such as Bitcoin or Ether lost again in value. With many digital systems, the price losses were even in the double-digit percentage range compared to the previous day. Overall, market sentiment seems to have been hit hard after the recent euphoria.

Bitcoin, the oldest and by far the largest internet currency on the market, fell back by more than 15 percent at times on Tuesday morning. A low of 45,000 US dollars was recorded on the Bitstamp trading platform. Bitcoin was still much higher at the weekend and reached a record high of $ 58,354. Since then it’s been going downhill.

The  second largest cryptocurrency in terms of market share, Ether, lost just as significantly as other digital stocks, including XRP, Litecoin and Bitcoin Cash. Sometimes the losses amounted to twenty percent or more.

The  market value of all roughly 8,500 cryptocurrencies fell to $ 1.35 trillion after hitting a record high of around $ 1.76 trillion over the weekend. All Bitcoins in circulation were worth around $ 850 billion on Tuesday. Last Friday, the $ 1 trillion threshold was exceeded for the first time.

The  price increases in the past weeks and months are unparalleled. Just over a year ago, a Bitcoin was worth less than $ 10,000, and since then its value has increased almost sixfold. Such sharp price increases rarely turn out to be sustainable in retrospect.

The  market recently received support from the increased interest of large companies and long-term investors in digital currencies. First and foremost, the electric car manufacturer Tesla and its boss Elon Musk should be mentioned.

The  company has invested billions in Bitcoin and wants to accept the crypto currency as a means of payment in the future.

Billionaire Musk has long been an ardent advocate of digital currencies and especially Bitcoin. However, when asked, he was recently a little more cautious about what he saw as the high price of Bitcoin. That too has caused disillusionment on the market.

Innsbruck sums up the fourth defeat en suite against Salzburg –...

Mick Schumacher with a solid training debut in Abu Dhabi

Immunity to the coronavirus – protected from Covid-19 for years?

Sensation in the penalty shoot-out: Kiel dramatically bowled Bayern out of... 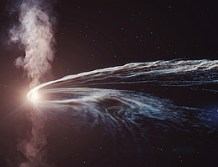