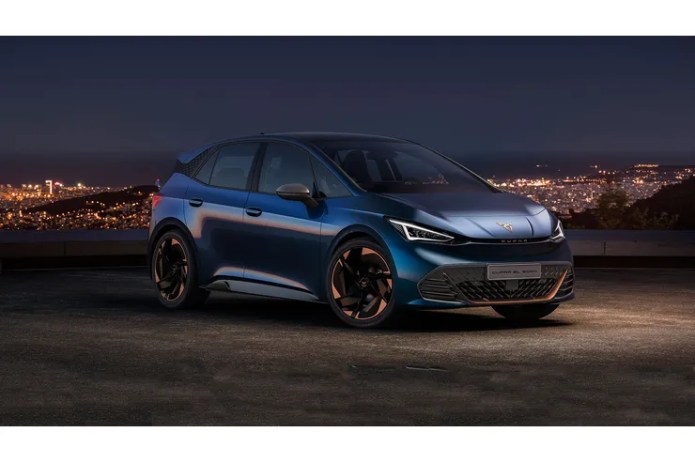 As brand boss Wayne Griffiths announced in a strategy presentation, the El-Born will initially only be available as a Cupra and not as a Seat. Of course, it is based on the VW Group’s (MEB) modular electrical system.

The  Cupra El-Born is built in Zwickau.

The  Spaniards have not yet given any information on the performance of the electric drive. It can be assumed that it will initially receive the 150 kW (204 PS) power level of the MEB. According to Griffiths, however, more power should be available for a short time – for example when overtaking. A generally stronger model version could also follow later. Cupra wants to tune the ID.3 chassis to be more dynamic and add adaptive dampers.

With the largest battery available for the MEB (77 kWh), the WLTP range should be over 500 kilometers. Thanks to the fast charging option with up to 100 kW (direct current), an empty battery should offer 80 percent of the maximum range again after 47 minutes of charging. In addition, a heat pump should increase the range by up to 60 kilometers because it reduces the consumption of electric heating. Analogous to VW, where ID.3 is followed by ID.4, a production version of the Cupra Tavascan study should follow as a second electric step.

The  cockpit is digital

Inside we see a free-standing screen on the dashboard. He is inclined to the driver. This display could already be seen in a similar way during the study.

The  driver grabs a three-spoke steering wheel and looks at a digital cockpit. In addition, Cupra supplies a head-up display with augmented reality function and a connectivity and infotainment system with a twelve-inch screen. Cupra mainly produces the materials used from recycled plastics. 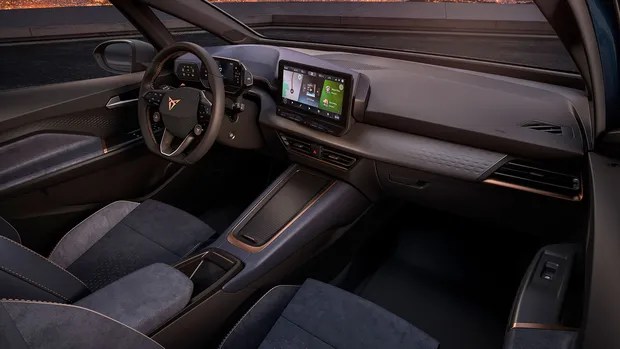 View into the cockpit, the El Born has a screen tilted towards the driver.

The  cockpit is also digital.

A Erlkönig caught underlined the ambitions of the VW subsidiary.

The  rapid development of series shows how close the study was to the series version.

The  Erlkönig could pass through as a sticky study.

The  Erlkönig impression was confirmed by pictures for the patent application, which show the El-Born as it were in the study.

The  first pictures released by Cupra show the electric model in Cupra trim.

The  color-contrasting logo and lettering in the slot between the headlights are emblazoned on the front.

The  apron has a dynamically styled honeycomb pattern.

The  light alloy wheels also come in an expressive style including a logo in the wheel hub. 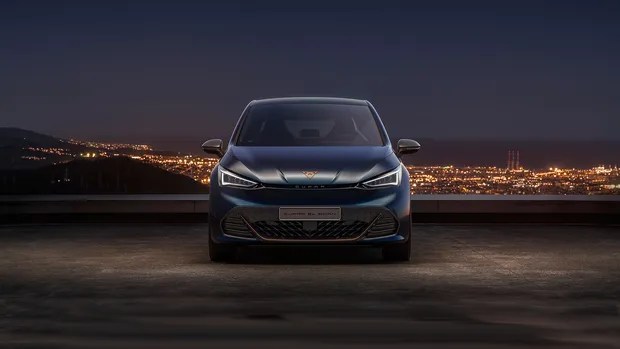 Look back at the study

The  front of the El Born study bears a resemblance to the Model 3 from Tesla, and the rear and proportions are reminiscent of the old Altea compact van.

The  A-pillars have been moved far forward, as is typical of an electric car, which is good for the space in the passenger compartment. However, they disturb the driver when looking into left turns. This is also due to the manageable width of the El-Born – at 1.77 meters, the Seat is more than ten centimeters narrower than Audi’s MEB-SUV Q4 E-Tron.

The  generous triangular windows at the front only help to a limited extent, the cladding of the A-pillar, which is covered with Alcantara-like fabric, is simply too powerful in the field of vision. In addition, the view from the Spanish MEB car is not as good as, for example, from the Q4 E-tron. In the Seat, one would like to screw the driver’s seat higher, because the attractive, inwardly curved hood can only be guessed at the sides. 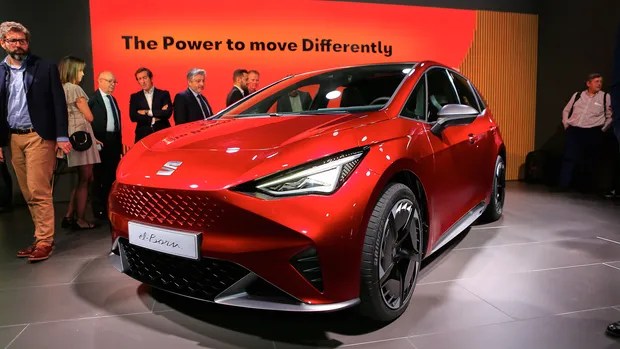 The  20-inch wheels sit close to the ends of the body. This maximizes the wheelbase to around 2.77 meters (like the Q4 E-Tron) and also benefits the interior, where there is ample legroom at the front and rear. However, the limits of the space economy of the MEB become apparent if the body is not to be too high despite the 14 centimeter high battery in the vehicle floor. At 1.54 meters, the Seat is seven centimeters less high than the Q4 E-Tron, for example. That is why the rear bench is almost a bit low, so that there is definitely enough headroom. But this means that taller people lack thigh support at the back. In addition, the seats are mounted relatively low on the flat floor, so that the feet cannot easily find their place under them.

The  trunk, on the other hand, appears adequate and very accessible even in the prototype. Only under the double loading floor did the Spaniards not want to reveal anyone. In total, the El-Born is 4.33 meters only five centimeters longer than a Leon. In the interior, despite the restrictions described above, compared to Audi’s considerably larger electric SUV, it appears significantly more airy than the current compact car with a combustion engine.

When designing the body, the Spaniards placed particular emphasis on aerodynamics, as shown by the flat front, the elaborate roof spoiler and the turbine design of the rims. Because the wind slippage is the key to greater range, especially at higher speeds, because the air resistance increases quadratically with increasing speed. However, Seat does not give a drag coefficient. 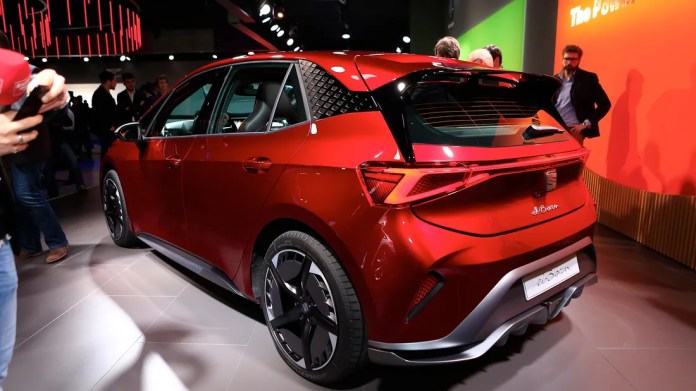 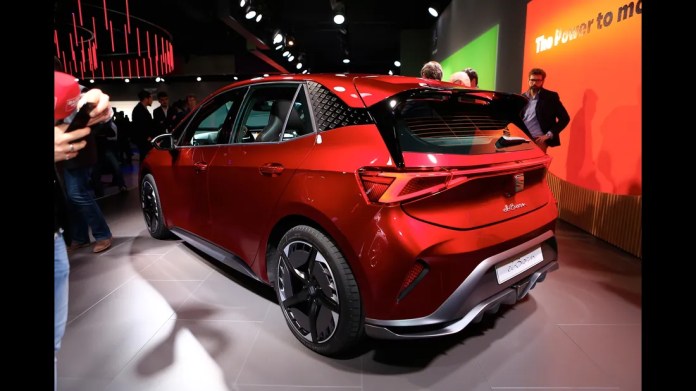 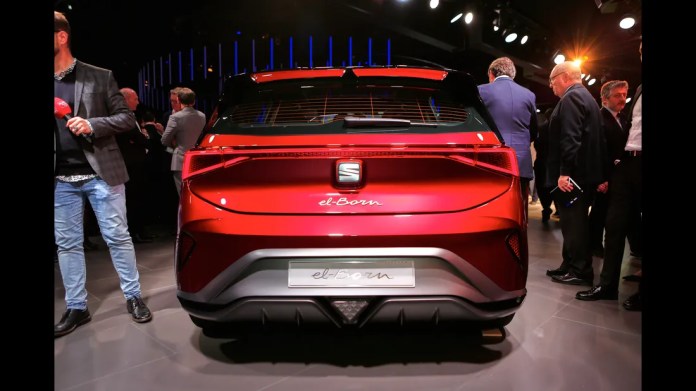 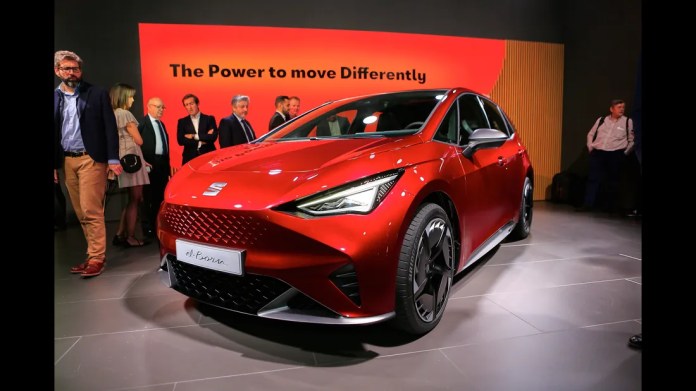 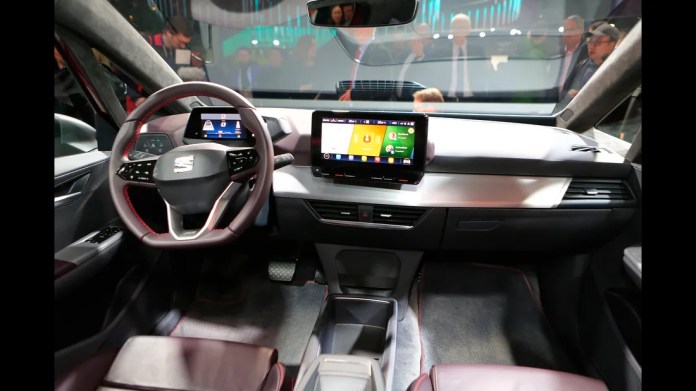 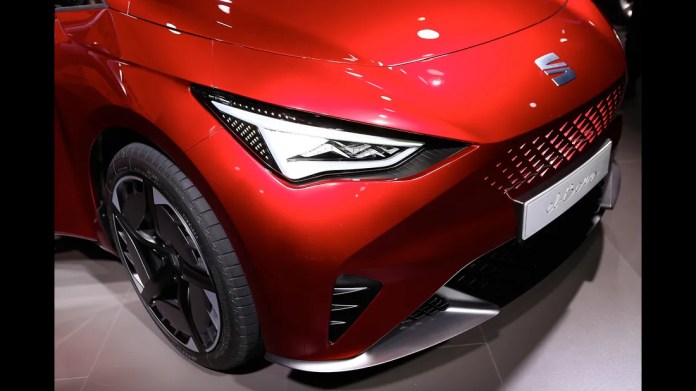 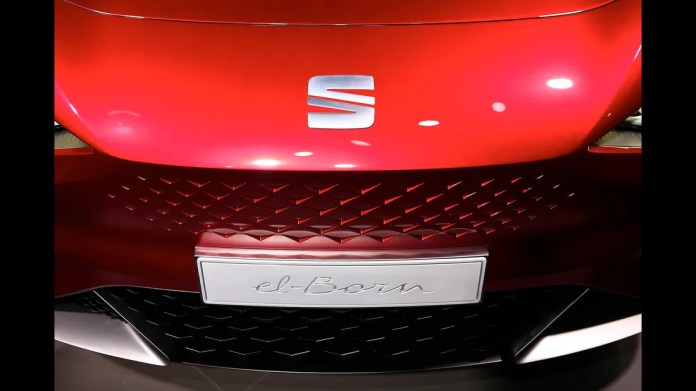 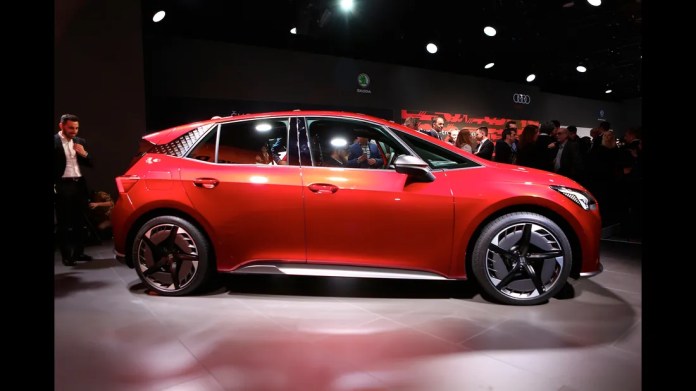 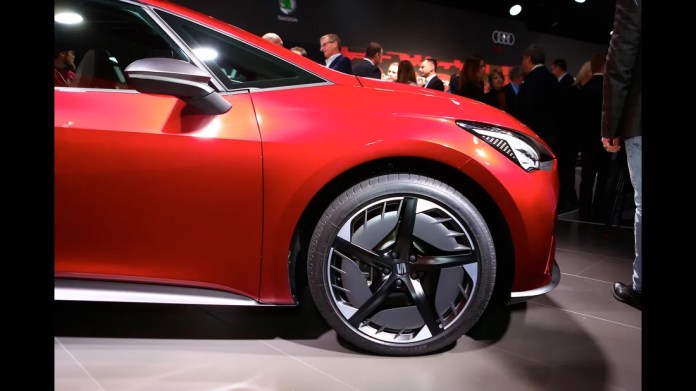 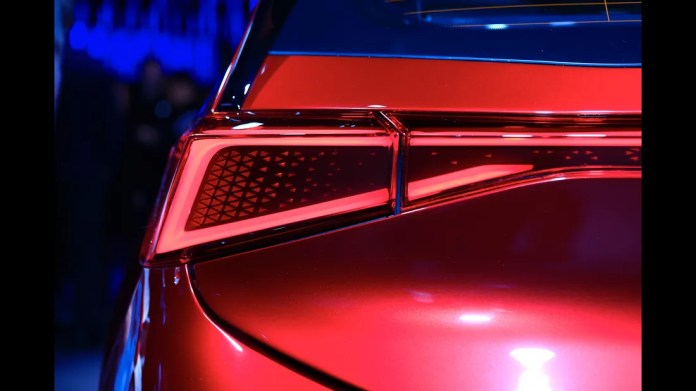 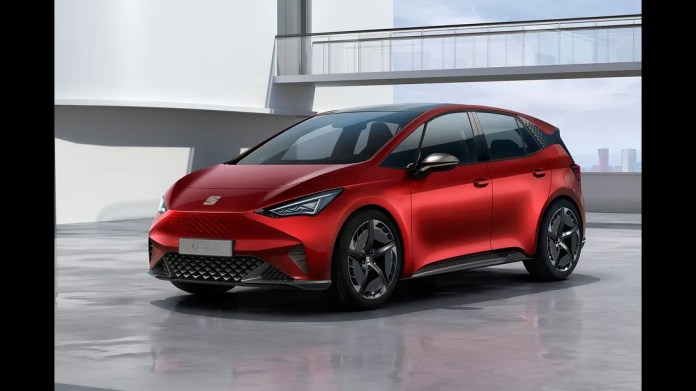 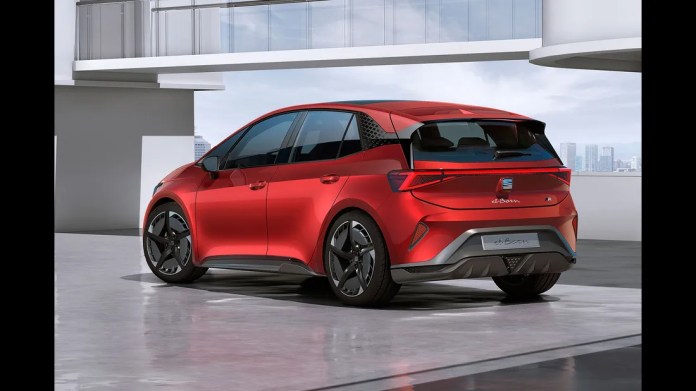 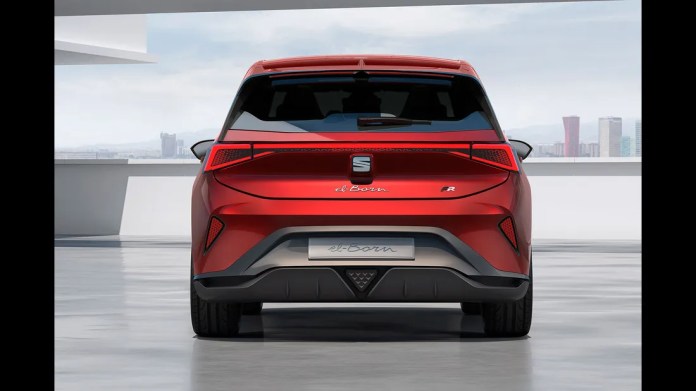 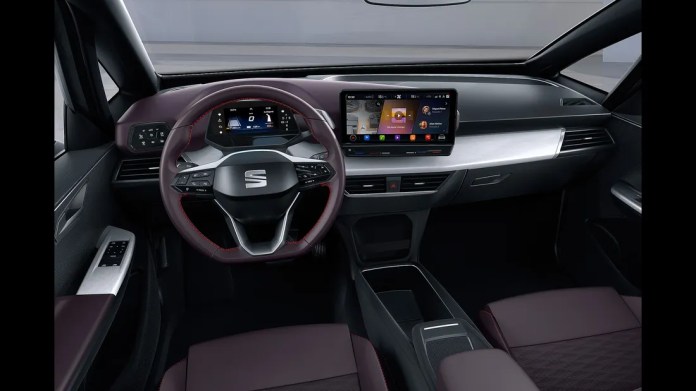 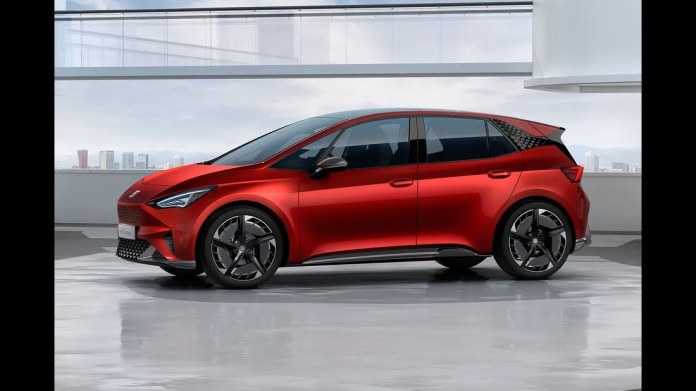 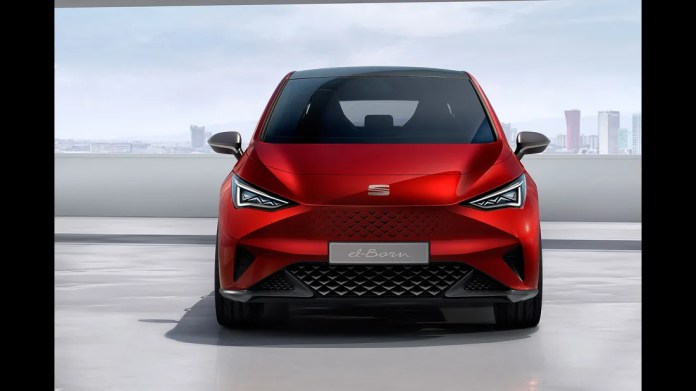 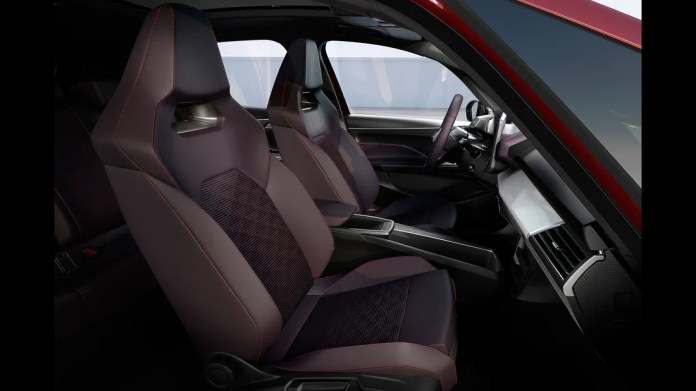 The  engine of the MEB is in the rear. In Seat’s concept car, it is the 204 PS version of the synchronous motor that is supposed to accelerate the electric car from a standing start to 100 km / h in 7.5 seconds and justifies the word FR on the rear of the study. For the first version of the ID.3, however, VW spoke of 170 hp and 8 seconds acceleration time as well as a 48 kWh battery in the basic version.

At the start of series production, Seat VW is giving way: While the ID.3 is due to hit the streets in early 2020, the market launch of the el-Born is announced for later in the year. It is not yet clear whether the car will be called that. However, the model designation corresponds to Seat’s habit of using names from Spanish geography and here referring to a district of a metropolis, which is certainly suitable for electric cars. It is also very certain that the MEB Seat, like the ID.3, will come from the VW plant in Zwickau, which has just been converted for electric car production.

No, I’ll wait and see and stay with the combustion engine.

Yes, now is the time.

The  Cupra, based on the modular electrical construction kit, resists the temptation to ride the high-build SUV wave like its group siblings. This is good for the drag coefficient, frontal area and air resistance and thus range. Less for the space available.

The  El-Born, five centimeters longer than the Leon, is subjectively no better than a Golf and therefore probably worse than the ID.3 that comes on the market before it. But the design is brand-appropriate.

Corona crisis: German exports rise for the ninth month in a row

Tips is now a “great place to work”

Conversion of Dash 8: How a passenger plane becomes a water bomber

Coronavirus: Vaccination center at Laage Airport should be ready to go...

Biathlon in Kontiolahti: Denise Herrmann and Erik Lesser on the podium