In a colorful convoy with decorated cars and loud music, the self-proclaimed “freedom drivers” started at Heiligengeistfeld – but they didn’t get far. Because the car parade was accompanied by counter-demonstrators on bicycles, who repeatedly blocked intersections and thereby stopped the convoy and tore it apart.

Individual motorists in the convoy then tried to push the cyclists to the side and drove their cars to them.  The  police had to clear several crossroads of counter-demonstrators, and the officers arrested a cyclist.

The re were significant traffic obstructions around the Inner and Outer Alster.

At the same time, critics of the Corona measures met again for a silent march on Jungfernstieg, where around 200 participants came.

Corona in Berlin: the number of deaths rises to 1066

How the Corona rapid test works for at home – SWR... 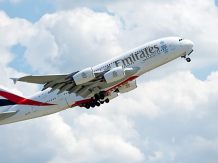 Emirates once again safest airline in the world – economy –

Vettel’s last time in a Ferrari In Innerrhoden, the number of coronavirus reproductions is currently the highest...