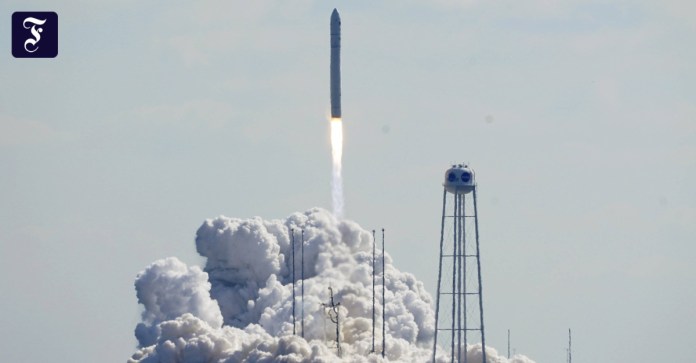 The  private freighter “Cygnus” has set off for the International Space Station ISS. On board: food for the astronauts, equipment for space walks – and worms for science.

Mith worms and more than three and a half tons of supplies on board, the private freighter “Cygnus” set off for the International Space Station ISS on Saturday afternoon (local time).

The  unmanned capsule took off from a launch base on Wallops Island on the American east coast, as video recordings by the American space agency Nasa showed.

The  “Cygnus” is scheduled to dock with the ISS at the beginning of the coming week.

The  freighter, built by the American aerospace company Northrop Grumman, took off at the tip of a 43-meter-high “Antares” rocket. On board is food for the seven astronauts on the ISS, equipment for space walks and several experiments. One of them is supposed to investigate how the muscles of worms develop in weightlessness. Nasa hopes that this will provide new insights into the effects of long-term missions on the health of their crews.

As soon as the crew has brought the cargo onto the ISS, they will fill the “Cygnus” with the waste from the past weeks.

The  garbage will later burn up together with the capsule when it re-enters the earth’s atmosphere.

In 2018, the German ESA astronaut Alexander Gerst lived and worked on the International Space Station ISS for more than half a year. For the first time in more than a decade, the European Space Agency is looking for new astronauts.

The  application process officially starts on March 31st, the application deadline ends on May 28th, as the ESA announced. Applicants must, among other things, speak fluent English and one other foreign language, and provide a certificate from an aviation medicine doctor stating that they are sufficiently fit. In addition to an extensive questionnaire, a letter of motivation is also part of the online application.

GP of China before postponement

Hildburghausen district: Ban on worship due to Corona remains in place

Smashing Real: In these cities, the supermarket giant is disappearing