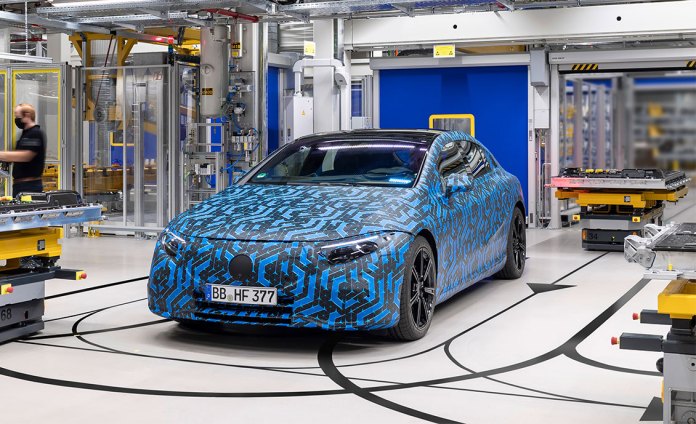 Ola Källenius took over as Chairman of the Board of Management of the Daimler Group almost a year and a half ago.  The  Swede is again focusing more on luxury and is focusing more on the future trends of electromobility and sustainability. For this purpose, the truck division will be separated and the remaining company with a focus on passenger cars will be renamed Mercedes-Benz AG. Källenius is already planning the next big step: a premature shutdown of the combustion engine.

The  end of gasoline and diesel cars could come much earlier than planned at Mercedes, reports the Handelsblatt. So far, the final farewell is planned for the year 2039, but the group is now examining an earlier transformation: According to this, the premium provider could only deliver new cars with electric drives five or eight years earlier. Mercedes would then be a pure Stromer builder by the middle of the next decade at the latest. As a symbol of the realignment, the next generation of the S-Class luxury sedan expected in 2028 could only be offered electrically.

Mercedes has so far offered the large SUV EQC, the minibus EQV and the compact SUV EQA, which are based on combustion platforms.

The  EQC in particular is seen as a flop; demand for the recently launched EQA volume model remains to be seen.

The  upcoming electric S-Class counterpart EQS introduces the new EVA electric platform, on which the EQE in the E-Class segment and SUV versions of EQS and EQE are also based. In the middle of the decade, new compact and medium-sized electric cars are to follow on the new “Electric first” MMA architecture.

According to the report, Mercedes is currently discussing which technology will be used next for large sedans and heavy urban SUVs.

The  new platforms will not be used until 2027 or 2028, but due to the development cycles in car manufacturing, they will have to be determined by 2022. So far, Mercedes is planning platforms that will continue to allow combustion systems.

The  best electric cars can, however, be realized with architectures designed exclusively for the alternative drive type. Källenius and his team should consider that the MMA will be the last new architecture to be built in large numbers of combustion engines.

With a view to saying goodbye to internal combustion engines at Mercedes, nothing has yet been decided, so that Handelsblatt – But Källenius is in a hurry.

The  current targets for the sale of electric cars and plug-in hybrids envisage a quarter by 2025, half by 2030. “I can very well imagine that we will correct these targets upwards,” said the Daimler boss Business newspaper. He did not want to comment on an earlier exit from the world of combustion engines.

Daimler’s truck division, which will be independent in the future, will also be electrified, albeit at a slower pace than the passenger car division. In addition to the battery drive, electric vehicles with additional hydrogen fuel cell technology for greater range and faster refueling are also on the program. “

The  use of fuel cells is right for trucks,” said Daimler Truck boss Martin Daum dem Handelsblatt. However, the diesel engine will be indispensable for commercial vehicles for a long time to come. “Daimler Truck will be burner-free much later than Mercedes-Benz AG,” said Daum.

Huub Stevens is Schalke’s great luck – but one question remains

Hundreds of schoolboys kidnapped in Nigeria

How traffic should become safer – miscellaneous things from Germany &...