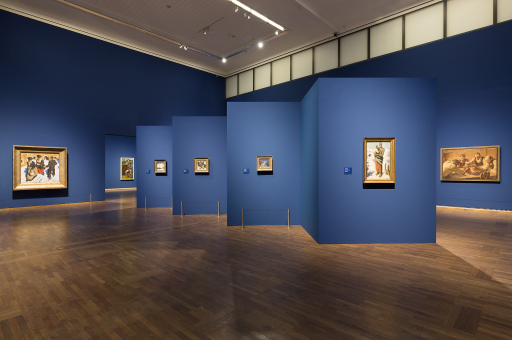 The  comprehensive exhibition brings together works by Boeckl, Böhler, Dobrowsky, Egger-Lienz, Faistauer, Frankl, Kolig, Pauser, Wickenburg and Walde from the period between 1918 and 1938

The  works of Austrian art between 1918 and 1938 demonstrate the pluralism between a restrained, inward-looking, expressive colorism and a New Objectivity guided by a sober view of the world of things. Social, economic and political upheavals after the fall of the monarchy and the traumatic events of the war contributed thematic accents, even if they were clauses.

Vienna (OTS) – Works by eleven artists who made a significant contribution to Austrian painting modernity during the First Republic will be shown in the exhibition at the Leopold Museum from February 10th Dawn of mankind. Between lyrical sensitivity and objective worldview. After the third corona-related lockdown, this show, curated by Director Hans-Peter Wipplinger, marks the start of the exhibition year 2021 at the Leopold Museum.

The  presentation ties in with the current permanent exhibition in terms of time and subject Vienna 1900. Departure into the modern age at.

The  works of Austrian art between 1918 and 1938 demonstrate the pluralism between a restrained, inward-looking, expressive colorism and a New Objectivity guided by a sober view of the world of things. Social, economic and political upheavals after the fall of the monarchy and the traumatic events of the war contributed thematic accents, even if they were clauses.
Hans-Peter Wipplinger, director of the Leopold Museum and curator of the exhibition

Between melancholy and cool objectivity

Instead of buried utopias, dystopias emerged in the years after the First World War; Social hardships, depression and skepticism about life spread. Artistic panoramas testify to an escape into playful representations, timeless still lifes or landscapes that appear magical and seem escapist in view of reality.

The  spectrum of the art of that time ranges from cheerful and dreamily lively depictions to melancholy subjects permeated with sadness.

The  expressive modalities of expression of that time are reflected in an emotional imagery, which had the questioning of identity models in view. Intense, luminous and dark, earthy tones that were used increasingly autonomously determine this painterly manner. Pastose patches of color occasionally drive the structure of the picture to dissolve and are used as a picture-forming material. In addition to the expressionist forms, it is the tendencies of the New Objectivity that dominate.

The  longing for structure, clarity and order was evident after the apocalypse of the World War and led to a sharp-edged, linear style, well-defined forms and a deliberately sober and cool presentation.

The  calm, rigidity and immobility of the processed subjects are paired with coloristic restraint and a consolidation of the form, which seeks to orientate itself towards the new reality through objective approaches.

Departure into the unknown

The  impulses that emanated from the creative power of expressionist art in painting, graphics and poetry of the early 20th century, but also international Cubist and post-impressionist influences formed the basis for expressive, color-accentuated painting in the interwar period in Austria.

The  political and cultural departure into the unknown was connected with a temporary artistic vacuum, after the early death of trend-setting artists and architects such as Otto Wagner, Gustav Klimt, Koloman Moser and Egon Schiele (all died in 1918).

Dawn of mankind as a sense of time

The  title of the exhibition refers to the collection of expressionist poetry published in 1919 by the writer and journalist Kurt Pinthus (1886-1975) Dawn of mankind. Symphony of Recent Poetrywhich outlines the diversity of poetry of those years.

The  book brings together lyrical texts by poets and writers such as Gottfried Benn, Walter Hasenclever, Georg Heym, Else Lasker-Schüler, Georg Trakl and Franz Werfel, illustrated by portrait drawings by the poets, among others by the artists Ludwig Meidner, Oskar Kokoschka and Wilhelm Lehmbruck or Egon Schiele.

The  works from the Leopold Collection presented in the exhibition give an insight into the artistic sense of time between 1918 and 1938, which was determined by both skepticism and the will to change.

The  Dawn of mankind can be understood in this context as the dawn of art as well as twilight, as the late rising of humanism before the great barbarism that led to the Second World War and the devastating consequences of which continue to have an impact today.

The  extraordinary achievements of domestic art production during the period between the wars contributed to a continuous consolidation of the position of Austrian art, supported by presence at international art exhibitions, such as the Venice Biennale up to the Paris World Exhibition in 1937, albeit under changed political circumstances .

Austria had been under the authoritarian political leadership of the Austro-Fascist corporate state since 1934. Architect Oswald Haerdtl designed the Austrian exhibition pavilion in Paris in 1937 in a factual and modern way. In the Jeu de Paume a selection of Austrian art was shown on the eve of the second world fire Austrian Art Exhibition, as a conscious official commitment to artistic independence of a shaky state, around a year before the forced conformity by the National Socialist dictatorship in March 1938, which Oskar Kokoschka found out about while in exile in Prague. In 1937 an exhibition was held in Vienna in the Austrian Museum for Art and Industry for the artist’s 50th birthday. In the same year in Munich, the Nazis showed works by the artist they ostracized in the infamous exhibition Degenerate art. Since 2019, the Leopold Museum has dedicated a separate area of ​​the permanent exhibition to Kokoschka Wien 1900, which is the largest permanent museum presentation for the exceptional artist.

Alpine skiing: Odermatt wins Super-G in Saalbach thanks to a dream...

Who is showing / broadcasting the Four Hills Tournament in Innsbruck...

For a Champions League game: Klopp returns to Dortmund at short...