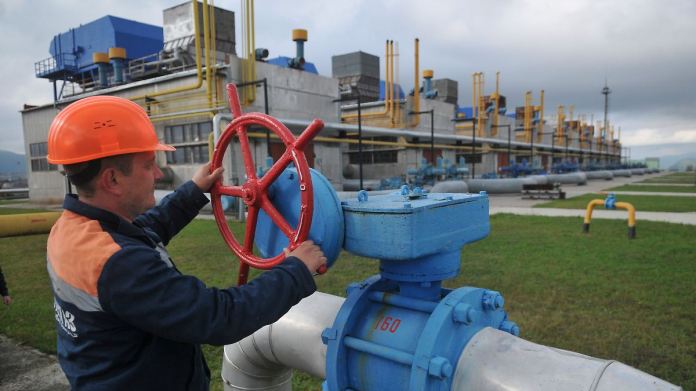 Deliveries to Europe
Gazprom is pumping more gas through Ukraine

Nord Stream 2 is not yet ready, but Russian gas deliveries via Ukraine are already declining. However, after a cold winter, Gazprom wants to pump more gas back to Europe in March. Because the German storage facilities are currently only 34 percent full.
In view of the depletion of storage facilities in Germany, the Russian energy company Gazprom wants to pump more gas through Ukraine towards Europe. A daily volume of 124.2 million cubic meters is planned for March. This emerges from the data from an auction for monthly transport capacities, as reported by the Interfax agency in Moscow. Originally, 110 million cubic meters of gas per day were planned. For the current month of February, the Russian gas giant had also booked 124.2 million cubic meters per day. However, that is less than a year ago.

The  background is that Russia wants to avoid Ukraine as a transit country. In 2019, after tough negotiations, a new five-year contract was concluded. Accordingly, Gazprom undertakes to deliver at least 40 billion cubic meters of its natural gas to the West via Ukraine this year. In 2019 it was 89.6 billion. According to data from the German Gas Association, gas storage facilities are currently 34 percent full. Because of the frosty weather, there was significantly more heating this winter than a year ago.

In the opinion of experts, the gas storage tanks are not unusually empty: In April 2018, for example, after a particularly cold February, the level was only 14 percent. Ukraine, meanwhile, reported record levels in its gas storage facilities. On Sunday there were 19.6 billion cubic meters in the stores, around 3.2 billion cubic meters more than a year ago. Most of the gas depots are in the western part of the country on the border with the EU.

Ukraine fears that it will become superfluous as a transit country once the controversial Baltic Sea gas pipeline Nord Stream 2 goes into operation.

The  financially troubled Eastern European country is urgently dependent on the fees it collects from Russia for the transport of natural gas to the EU. More than a week ago, Nord Stream 2 AG started laying pipes again near Denmark.

The  US wants to stop the German-Russian project with sanctions at the last few meters.

Weather forecast in Florida: Cold with a chance of iguana rain

The Xiaomi Redmi Note 10 Pro shows up at the FCC

DWD in Offenbach reports: Snow and ice determine the weather in...