On February 23, a new sub-area of ​​the streaming service from the Disney Mouse House, Star, which will accommodate adult content, will start.  The re will also be content of its own there. Ten European in-house productions have now been announced, two of them from Germany. By 2024 there should be around 50 originals from Europe …

The  Walt Disney Company EMEA: „With our contracting strategy, we demonstrate our commitment to produce first-class originals that are both tailored to local markets, but also have the creative goal of addressing a global audience. Europe enjoys a reputation as a creative powerhouse around the world, which combined with Disney’s expertise in high-quality storytelling and its relationships with top talent on and off the screen, will ensure that Disney + is the premier address for exciting and engaging entertainment in Europe is.“

The se first ten projects embody our ambitious vision for local productions. Our first European offering underscores Disney’s regional commitment to outstanding and diverse talent and reflects our desire to work with the very best creatives in the industry.“

The  series shows how Meffire became a media sensation during the early 1990s and the symbol of diversity in modern society during the period of German reunification. But only a few years later he ended up behind bars as an enemy of the state.“

The  production takes place under the umbrella of Big Window Productions. Jörg Winger (Germany 83) and Tyron Ricketts are involved.

The  second German production is a comedy series called Sultan City. This is created by Ayla Gottschlich and Aysel Yilmaz as well as by Ipek Zübert.

The re are four formats from France: the four-part “Oussekine“On the real murder case of student Malik Oussekine in December 1986; the fantasy story “Parallels“Over four teenagers in different dimensions; the comedy “Weekend Family“About a stepfamily’s chaotic weekends; and the documentary series “Soprano: Sing or Die“About a French singer who is preparing for his stadium tour in summer 2022.

The  Ignorant Angels“, Inspired by the movie”

The  Ignorant Fairies“; and a continuation of the 2010 Fox Italia comedy “Boris“,

The  behind the scenes of the fictional cheap series”

The  Eyes of the Heart“Plays and pokes fun at the entertainment industry itself.

Last but not least, there is a sports documentary about the football club Feyenoord Rotterdam from the Netherlands. 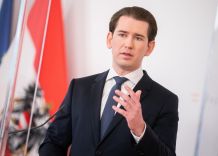