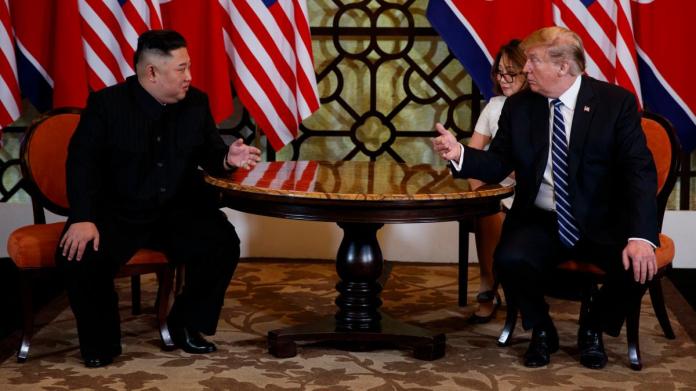 foreign countries After the Atomic Summit

After the failed summit in Hanoi, Vietnam in 2019, former US President Trump is said to have made a curious offer to North Korea’s ruler. He apparently suggested that he fly him home on the presidential plane.

Dhe second nuclear summit with North Korea’s ruler Kim Jong-un in February 2019 did not go as planned and negotiations on the North Korean nuclear program failed. Kim Jong-un had insisted on lifting all US sanctions against his country.

The  meeting in Hanoi, Vietnam became one of the most eye-catching in the Donald Trump presidency.

As the BBC now reported, experienced diplomats were amazed at the course of the meeting itself. Trump is said to have made an unusual offer to Kim Jong-un, despite the talks being broken off: he could fly him home with Air Force One.

And that although Trump left abruptly. Matthew Pottinger, the leading Asia expert on Trump’s National Security Council, told the BBC: “

The  President knew that Kim had come to Hanoi on a train ride through China that lasted several days.” He offered Kim Jong-un to get him home within two hours could bring, but the ruler refused.

Trump’s curious offer was confirmed to CNN by a former senior government official who was involved in the trip to the nuclear summit. Trump did not ask any of his advisors in advance whether an offer to take a flight was even conceivable. In fact, it could have caused serious security problems and, moreover, lead to unwanted diplomatic entanglements.

According to John Bolton, Trump viewed Kim Jong-un as a friend

According to the government official, who was not named by CNN, Trump’s offer must be seen as a friendly gesture towards the North Korean ruler.

The  publicized scene is thus feeding the view of Trump’s former security advisor John Bolton that Trump has seen Kim Jong-un as a possible new best friend since the first summit in Singapore.

At this first nuclear summit, Trump shocked his team with the admission to Kim Jong-un to cancel the joint military exercises between the United States and South Korea on the Korean peninsula that have been common for 60 years. Bolton described this concession, for which Trump was not demanding anything in return, to the BBC as a clear mistake. In this case, too, Trump expressed himself carelessly and without consulting his advisors.

The  offer for a ride could fuel a fresh investigation into his relationship with Kim Jong-un. Trump is already under criticism for failing to mention massive human rights violations in North Korea in talks with the dictator and instead focusing on possible financial investments if Kim Jong-un would have given up nuclear weapons. Indeed, North Korea’s nuclear program continued to grow over the period despite the negotiations. Corona numbers in Germany: How many people in your state have...

Corona in Hessen: Brazilian variant arrived at the airport

Freezing cold: Millions without water or electricity in Texas – Biden...

Union Berlin has to do without Max Kruse: will be canceled...

“Wasn’t particularly convinced at the beginning”

Start of construction in spring: LASK received approval for a new...