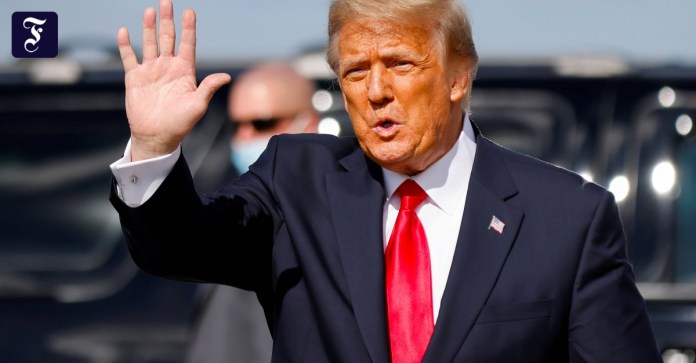 According to a report in the “New York Times”, Trump’s oxygen saturation level slipped into a critical range in October.  The  White House had presented the situation at that time much more relaxed.

Dhe Covid 19 disease of then President Donald Trump is said to have been more serious than the White House admitted last year, according to a report in the New York Times.

The  newspaper reported, citing four unnamed sources, that Trump’s blood oxygen saturation had dropped to critical levels before he was transferred to hospital. Trump is also said to have had visible signs of pneumonia on X-rays, as the “New York Times” reported on Thursday.

The  74-year-old Trump was brought to a military hospital by helicopter at the beginning of October 2020 because of Covid disease. According to official information, during a three-day stay there he was treated with an experimental antibody agent from Regeneron, the virus inhibitor remdesivir and the steroid dexamethasone. Experts already saw indications of a more severe course of the disease in the use of the drugs.

According to the “New York Times”, Trump’s oxygen saturation was at times only over 80 percent. Experts usually consider less than 90 percent a critical condition. Such a low oxygen saturation is one of the reasons for the use of dexamethasone.

The  White House officially said that Trump’s saturation had temporarily fallen to 93 percent.

Take diabetes symptoms seriously and act correctly in the event of...

Not a single gate this season: The Embolo riddle

2-1 victory for Central Switzerland – thanks to a double pack...