Borussia Dortmund has pushed its arch-rival Schalke 04 even closer to the abyss, the 180th Revierderby was most likely the last in the Bundesliga for the time being.

BVB prevailed in the Royal Blues thanks to their young stars Jadon Sancho and Erling Haaland with 4-0 (2-0) and celebrated three league wins in a row in the Ruhrpott classic for the first time in almost 54 years.

Dortmund reported back after just one three from the previous six league games in the race for the Champions League places.

The  Gelsenkirchen team, on the other hand, who won only one of the last 38 (!) Bundesliga games, are nine points behind the relegation place with twelve rounds to go and have to prepare for their fourth relegation after 1981, 1983 and 1989. Royal Blue was also unlucky: Shortly before kick-off, Rio World Champion Shkodran Mustafi was injured, and goalkeeper Ralf Fährmann was also injured after half an hour.

Sancho brought BVB to the lead after a capital mistake by Schalke Benjamin Stambouli (42nd), before the break, Haaland increased to 2-0 after Sancho preliminary work (45th). After the break, Raphael Guerreiro (60th) and Haaland (79th) met again with his 27th competitive goal of the season

Katzenberger and Cordalis are in meerkat costume 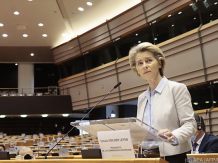 Salzburg celebrates 8-2: “That was a great warm-up for Moscow”

Gerwyn Price is the new king of darts – Sport Mix