From the first few years after the reunification to the present day, the number of orchestras has shrunk by almost a quarter.  The  musicologist Arnold Jacobshagen emphasizes, however, that there are still more orchestras in Germany than anywhere else in the world – and, by the way, twice as many in the east as in the west. Maintaining the much higher orchestral density of the former GDR in the 1990s, however, could not be justified politically.

The  ensembles affected after the turnaround were either located in small towns or in cities with several professional orchestras, that is, in locations where, apart from particularly obvious financing problems, no demand would have been expected in the medium and long term. Against this background and in relation Regarding the other far-reaching cultural, economic and social processes of change over the past three decades, it can therefore be clearly stated that the East German orchestras have survived the inevitable historical transformations more than “lightly”.

(www.imago-images.de)New start of musical life – “This self-evident thing is a thing of the past!”Music fans look very carefully in the direction of Easter. Maybe something will happen again in the country with the highest density of orchestras and opera houses in the world.

The  director of the Dresden Philharmonic explains what such a restart of musical life could look like.

In the case of the small town locations, however, the theater mostly survived while the additional concert orchestra was handled. Jacobshagen then admits: “

The  long list of dissolved concert orchestras shows that almost exclusively locations in the east were affected.”

The  history of the deletions began in 1991 with the Brandenburg Concert Orchestra Cottbus, followed by eight other East German concert orchestras within ten years. Orchestras also disappeared in the west, for example in North Rhine-Westphalia – two mergers of south-west German radio orchestras were also spectacular, the last only a few years ago. But did reunification change orchestra life for the better? It is noteworthy in the volume “Orchesterland Deutschland” that only one West German orchestral musician wants to experience a feeling of coalescence in the orchestra scene – the bass trombonist and DOV functionary Hartmut Karmeier from Trier, who spontaneously got into the car in January 1990 and drove to Weimar.

The  evening with colleagues from the orchestra board of the Staatskapelle Weimar in the restaurant of the venerable Hotel Elephant will not be forgotten.

The re was great interest in the collective agreement for cultural orchestras. Even at this early stage, the people of Weimar began to think about the place of their traditional ensemble in a possible all-German orchestra landscape.”

Take Weimar, for example: In the book you don’t always get the impression that orchestral musicians pay attention to changes in their social and professional environment – this is what the long-time Weimar concertmaster Ursula Dehler, of all people, involuntarily expresses.

“Nobody in the Staatskapelle was fired. We weren’t worried about our jobs either. Everyone was well trained.”

That must sound like a mockery to the ears of musicians from neighboring Weimar cities. Did musicians in Saalfeld, Gotha or Eisenach play so much worse than the Staatskapelle Weimar that politicians saw an opportunity to close or merge these orchestras? Orchestral musicians should not attribute it to their artistic achievement or to great traditions when state and local politicians decide to promote them consistently. Incidentally, the political leaders have at times recognized much better what will make orchestras worthy of funding in the future. For example Martin Eifler, the current head of the music division of the Minister of State for Culture Grütters. What the future demands of orchestras, Eifler no longer sees any difference between east and west orchestras – especially in the post-Corona era.

The  main challenge is first of all to win a stable audience, without which no social relevance can be achieved. Who is this audience, what educational requirements does it bring with it? What follows from the increasing diversity of our society and what from changed access on cultural content? How do expectations of cultural experience change? ”

In times of Corona, orchestras ask themselves such questions even more, but still not strongly enough. As was the case shortly after the fall of the Wall, the interest group for the orchestras, from which this booklet originates, should not continue: If orchestras were retained at that time despite discussions about closure, sometimes the same, sometimes noticeably lower paid, then that was welcomed. But perhaps this reaction was too undifferentiated after reunification.

The re was no strategy for the orchestra of the future as a cultural institution. That is what the Thuringian minister of education, Benjamin-Immanuel Hoff, suspects.

“In 2005, Kristina Volke criticized the East German cultural transformation for the fact that the reorganizations were not designed for the forward-looking management of the coming crisis, but for the preservation of the numerous individual institutions. What seems all too understandable from the situation of the time turns out to be in retrospect strategic error. “

A foretaste of the great orchestral deforestation?

In contrast, Minister of Culture Hoff proudly proclaims in the book “Orchesterland Deutschland” that at least the up to thirty percent wage differences in Thuringian orchestras should now come to an end: “

The refore, with the budget for 2021, the Rudolstadt

The ater with the Thuringian Symphony Orchestra should finally return to the flat rate . ”

Astonishment is appropriate: During the pandemic, culture is under pressure to justify itself like never before. When asked, the Thuringian Ministry of Culture now hears a somewhat more cautious formulation:

The re should be improvements.

The re is no longer any question of the area tariff for the battered Rudolstadt orchestra, one of the oldest in Germany.

The  municipalities would not participate. Is that a foretaste of the major orchestral deforestation in the province? You can hardly say it: But maybe now is the worst possible time to draw a conclusion in a book about how good the German orchestral scene is economically and politically.

Family doctor has had enough of opponents of vaccinations – and...

At least five dead in India: Fire at the world’s largest... 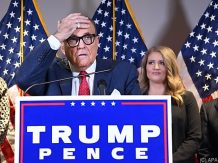