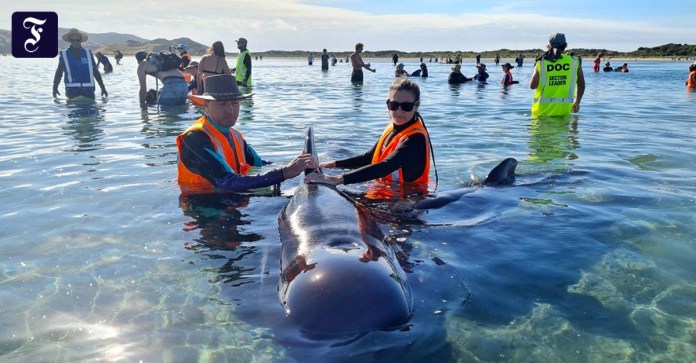 Helpers look after the animals until the tide sets in.
Image: Handout / Project Jonah / AFP

In front of the Farewall Spit headland, more than 50 whales were caught in shallow water on Monday, nine of them perished. It was still unclear why the marine mammals were stranded – there are always similar incidents there.

VSeveral dozen long-fin pilot whales were stranded on the tip of New Zealand’s South Island on Monday. In total, more than 50 animals got into shallow water on the Farewell Spit headland, nine of them died, said the nature conservation authority of the Pacific state. Numerous helpers were on duty to cool the whales until the tide set in, as the broadcaster Radio New Zealand reported.

Why the marine mammals were stranded was still unclear. For the group it seemed to be the first time, the animals showed no abrasions, the station quoted the ranger Amanda Harvey. Scientists are still trying to find out why such incidents are more common at Farewell Spit, it said. In February 2017, between 600 and 700 whales were stranded there, 250 of them died.

Long-fin pilot whales belong to the dolphin family.  The  black mammals can be up to eight meters long.

Europa League: WAC is looking forward to a duel with Tottenham

Why the vaccinations with Astra-Zeneca are not going well

The number of people infected with corona in Castrop-Rauxel and in...

The steep rise of Jude Bellingham: “As if he were born...