Erik Lesser, Roman Rees, Arnd Peiffer and Benedikt Doll only finished seventh in the World Cup relay race on the Pokljuka. After the first runner, the dream of another medal was over.  The  reason was a sharp drop in performance by Lesser on his third lap. Even his three teammates could not make up for this deficit despite their strong shooting performance.

The  title went to the Norwegians, who won the next with a sovereign race WM-Titles secured in Slovenia. Sturla Holm Laegreid, the brothers Tarjei and Johannes Thingnes Bö as well as Vetle Sjastad Christiansen were at the front from the start and ran a lonely race for long stretches.

No explanation for burglary

“We haven’t found anything to worry about him. But we have no real explanation“, said team doctor Dr. Jan Wüstenfeld after a first check by Lesser ZDF.

“Happens. If you catch a day like that and you’re already feeling bad in the second round, the third will be even worse. Everyone has experienced something like this before. Of course it’s a shame and I’m sorry for Erik. It’s not fun“, Peiffer defended his colleague.

Lesser tortures himself to the goal

After a rather mixed performance, Lesser was particularly under observation and then experienced a pitch-black day.

The  starting runner of the DSV-Teams had to reload once while lying down, but were initially able to keep the gap to the faultless French at the top within limits with 5.3 seconds.

But then he ran out of breath. After two more spare rounds standing and half a minute behind, Lesser collapsed completely on the way to the change. Runner after runner passed him, Oberhofer struggled to the finish. 1:23 minutes to Norway he handed over to Roman Rees.

Rees strong at the shooting range

For Rees, it was now all about damage control and the hope of somehow getting ahead. A flawless prone position was a start.

At the top, the Norwegian Tarjei Bö determined the action and set himself apart from the competition from France and Switzerland with 24 seconds. Even after three spare rounds, this lead only melted slightly as the pursuers also weakened. Roman Rees went back from the shooting range with five hits in five attempts and pushed the German quartet to 15th place (+1: 30.3 minutes).

Norway puts pressure and pulls away

Since Bö continued to push the pace at the top, the gap continued to grow until the change. Arnd Peiffer, vice world champion in singles, took over in 13th place. At this point, Norway had hurried 1:45 minutes, while Ukraine on bronze was one and a half minutes ahead of the German ski hunters. Peiffer managed two flawless shoots and slowly pushed the German team towards the top 10. However, the gap leveled off at almost two minutes.

Doll can’t make up for anything anymore

In his first race at this World Cup, the Norwegian Christiansen ran an unexcited race as the final runner and brought first place safely across the finish line.

The  lead over his pursuers was too great.

The  Russian team came in second after the prone shooting (+54.6 seconds). France, Sweden, Italy and Ukraine fought another 20 seconds behind.

Since the nations before Germany did not make any major blunders, there was not much to achieve for the final runner, Doll, despite only having one spare in ten attempts. In the battle for the podium, Sweden was finally able to overtake Russia and take silver after the last shooting.

Nioh 3 is not an issue at first, Team Ninja should...

Recall! Poison in popular “Italy” product – cancer and other...

Vaccine Approval: Millions Are Getting It, But We Have To Wait...

HIGHLIGHTS: Arsenal FC – SK Rapid Wien, the highlights in the... 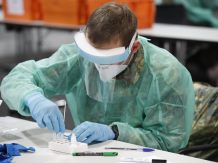