Bundesliga: That was Saturday, that will come on Sunday

“Both professional groups perform tasks that are of great importance for our entire society, which should also be shown in the vaccination prioritization,” said the CDU politician of the German press agency. A decision in principle is expected at the beginning of the week.

Shortly before the start of school operations in ten federal states this Monday, there are increasing indications that a third corona wave could be imminent in Germany. Despite the strict lockdown, the number of new infections every day has hardly or not decreased at all recently. Experts attribute this to the spread of much more contagious virus variants. Against this background, the debate about a faster corona vaccination for teachers and educators has picked up significantly new momentum.

In the vaccination sequence in Germany, three large groups have been defined: group one with “highest priority”, group two: “high priority”, and group three: “increased priority”. According to the current vaccination ordinance, daycare and primary school employees are in group three and would probably not be there until the summer. Chancellor Angela Merkel (CDU) and the heads of government of the federal states asked the Ministry of Health at their most recent meeting to check whether these employees could be brought forward. For this, the current vaccination ordinance would have to be changed.

According to Baden-Württemberg’s Minister of Health, Manne Lucha, this change is already in progress. A fundamental decision should probably also be made in the health ministers’ conference this Monday, said the Green politician on Saturday in Stuttgart. Spahn had also announced that they wanted to take the employees at daycare centers and elementary schools quickly to the next higher vaccination group and make a vaccination offer earlier.

The  Association for Education and Upbringing (VBE) warned against an opening competition between the countries. “

The  openings are not a competition in which the federal state wins, which implements the most extensive easing and risks the health of all those involved to the maximum,” said VBE boss Udo Beckmann to the editorial network Germany (RND / Sonntag). Whoever wants to open has to make vaccination offers. It is good that the prioritization of teachers when vaccinating is checked. “

The  only question is when a decision will be made – and why the school should open before that.”

This Monday, elementary schools will open again in ten other countries.

The re is either so-called alternating operation with half classes that come to school alternately, or full operation with fixed groups that should not meet if possible.

At daycare centers, more children or all of them are allowed to return to childcare. That also differs in the countries. For older pupils and young people, what is known as distance learning continues. Final classes remain exempt from this.

In Lower Saxony, elementary school students have been back in schools since January, and in Saxony since the beginning of this week.

The  daycare centers in the Free State have also been open again since Monday. 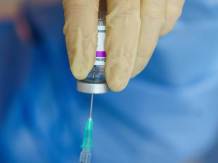 Astrazeneca: “Distortion of perception” in Germany – Germany and worldwide

Storm situation in Germany: how severe is it?

This is how the climate youth wants to save the earth