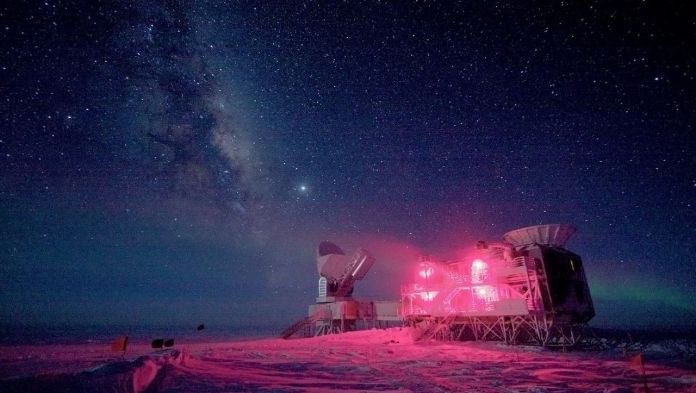 The  Earth’s magnetic field can be capricious. It surrounds the globe and is created by currents of liquid iron in the outer core of the earth. This is of enormous benefit to humanity. Because people have orientated themselves for centuries using the compass. In addition, the magnetic field protects the earth from cosmic rays.
But its strength fluctuates constantly.

The  magnetic poles migrate, sometimes reverse completely, and may continue to do so in the future. A brief reversal last occurred a little more than 41,000 years ago, known in science as the “Laschamps event”.

The  magnetic north and south poles were reversed for less than 500 years, during which time the earth’s magnetic field only reached around 28 percent of its current strength.

The y believe that the reversal of the Earth’s magnetic field changed the Earth’s atmosphere and climate significantly.

The  consequences for life on earth may have been serious, write Alan Cooper from the South Australian Museum in Adelaide and Chris Turney from the University of New South Wales in Sydney in the journal Science. As the researchers based in Australia report, lakes could have dried out and large parts of North America iced over. Perhaps even the extinction of numerous animals and the disappearance of the Neanderthals were favored.

Cooper and Turney report that the magnetic field was temporarily even weaker in the time before the first polarity reversal and was only around six percent of the current value.

The  researchers named this phenomenon about 42,000 years ago the “Adams event”, named after the science fiction author Douglas Adams.

In their investigation, the scientists used giant kauri trees (Agathis australis), which grew in New Zealand more than 40,000 years ago and were preserved in swamps. Your tree rings cover a period of 1700 years – and thus also the time of magnetic turbulence.

The  growth rings contain indications of the amount of the radioactive carbon isotope C-14, which is used to determine the age with the radiocarbon method.

The  subfossil kauri trees are an exciting archive of the atmospheric composition,” says the palaeoclimatologist Florian Adolphi from the Alfred Wegener Institute, Helmholtz Center for Polar and Marine Research (AWI), who was involved in the study.

The  researchers linked the data obtained with other data sets, such as analyzes of ice and sediment drill cores, for precise chronological classification.

Using computer models, the researchers simulated how the increased cosmic radiation affected the chemistry of the atmosphere, which also affects the climate. Among other things, they found that the weakening of the earth’s magnetic field had led to a decrease in ozone. “Unfiltered radiation from space tore apart air particles in the earth’s atmosphere, separated electrons and emitted light – a process called ionization,” explains Turney. “

According to the researchers, this triggered a wave of changes in the atmosphere. This also included more dazzling plays of light, which we know as northern lights, and which at that time could have been observed not only near the poles, but across the globe.

Extinction of the Neanderthal man due to magnetic field questionable

The  precise analysis of the “Laschamps event” enabled the researchers to relate the weakening of the earth’s magnetic field to numerous anomalies in sediments and volcanic rocks from 41,000 to 42,000 years ago.

The y hypothesize the effects in their article numerous times.

The  researchers write that large lakes in Australia could have dried up as a climatic consequence of the weakening of the magnetic field. Elevated surface temperatures in Europe and lower in North America, as well as the growth of the ice sheet in North America shortly after the event, could also be related.

In addition, the weaker magnetic field and the associated increased levels of ultraviolet radiation could have led to the extinction of large mammals in Australia and even the Neanderthals in Europe, the scientists explain, referring to earlier studies.

The  increased occurrence of cave paintings in Europe and Southeast Asia could be related to the fact that people at that time increasingly sought protection from the sun in caves.

In an accompanying article, “Science” editor Paul Voosen writes that in addition to agreeing with the researchers’ theses, there is also contradiction. Anders Svensson, a glaciologist at the University of Copenhagen, says that no corresponding signals can be found in ice cores from Greenland and Antarctica. Thomas Higham, archaeologist and radiocarbon expert at the University of Oxford, believes the connection between the weakness of the earth’s magnetic field and human development is speculative, according to the article.

None of the milestones in human evolution corresponded well with the polarity reversals 42,000 years ago and none occurred suddenly.

The  researcher Norbert Nowaczyk from the German Research Center for Geosciences in Potsdam, who was involved in the study, does not consider such causal relationships to be ruled out, but rather improbable.

Today’s climate is also influenced by the earth’s magnetic field, which has been weakening again for around 2000 years. Since the first direct measurement 170 years ago, it has become around nine percent weaker. Whether this heralds a pole reversal is controversial. What is certain is that magnetic turbulence is likely to have a serious impact on our society, which is largely based on electronics.

At least in the animal world, this could already be the case. Because solar storms disrupt the Earth’s magnetic field, whales could easily become disoriented and stranded on coasts more often.

Viersen: Expert opinion incriminates the kindergarten teacher after the death of...