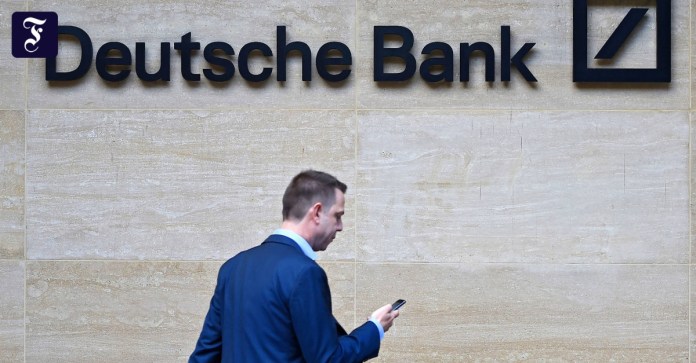 Dhe employees of Deutsche Bank can look forward to more than just a profit in the past year after many years of losses in a row.  The  performance-based remuneration is also likely to be slightly higher than the 1.5 billion euros for 2019. However, CEO Christian Sewing was unable to fully enforce his bonus plans with the banking supervisors of the European Central Bank (ECB).

The  FAZ learned this from financial circles.

The  Bloomberg news agency reported about it first. Accordingly, the bank wanted to pay out bonuses in the volume of more than 2 billion euros.

The  supervisors had objections to this due to the not yet foreseeable consequences of the corona pandemic, which, however, was to be expected in advance. When it comes to dividends, too, they urge the banks to be very restrained, which is not necessary in the case of Deutsche Bank, because it does not want to distribute any profits to its shareholders.

The  ECB supervisors recommend a similar moderation in performance-based remuneration. Banks are supposed to conserve capital and liquidity in order to be prepared for a wave of insolvencies and the associated loan defaults.

It can be assumed that the ECB will loosen the reins again in the coming year if the corona damage can be better quantified in the bank balance sheets.

The n banks with high equity and liquidity buffers are likely to let their shareholders and employees participate more in the success of their business. A spokeswoman for Deutsche Bank did not want to comment on the bonus plans or the talks with the ECB supervisor. A spokeswoman for the ECB also declined to comment.

Last year, Deutsche Bank had again achieved a net profit of 624 million euros after six years of losses in a row.

The  investment bankers in particular made a decisive contribution to this with an increase in earnings of almost a third. For them, bonuses are an important part of their remuneration, especially since many investment bankers and dealers at Deutsche Bank work in London. American or British houses there often pay higher bonuses, with which Deutsche Bank competes for staff. In the previous year, the bonuses of 1.5 billion euros were added to retention and new hiring bonuses of 242 million euros.

In northwestern Europe: Neanderthals died out earlier than expected

Seaside maker dies in an avalanche – “Sacha Altermatt was an...