The  “economic wise men” lose their boss: After two terms in office, Lars Feld’s time on the advisory committee of the federal government ends.

The  SPD prevented another term of office for the chairman of the “Wirtschaftsweise”, Lars Feld. This means that Feld is leaving the Advisory Board at the end of February.

The  “Handelsblatt” reported, the report was confirmed to the German press agency on Monday in coalition circles.

The  Union wanted to hold on to the Freiburg economist. As a rule, the term of office of a member of the Expert Council ends after two terms, this is the case with Feld.

Feld told the Reuters news agency: “Since the SPD is blocking an extension to a third term of office, as the CDU has proposed, I will be a free man again from then on. On your part, as far as I know, the CDU is blocking the SPD proposals, so that the SVR has to continue with four people first. ”

Jens Südekum in conversation as his successor

Feld is regarded as a proven regulatory politician, i.e. oriented towards the principles of market and competition and against a major influence of the state. According to reports, the SPD preferred a candidate like the Düsseldorf economist Jens Südekum. This is closer to positions of the SPD, it said. But there was no consensus on this in the coalition, so that there is initially no successor for Feld.

The  experts are colloquially referred to as the “economic modes”.

The  four would have to choose a boss from among their ranks. It is not clear that the choice will inevitably fall on the financial economist Wieland, who has served on the council since 2013, said an insider.

The  “Handelsblatt” reported that the replacement of the fifth person might not be clarified until after the federal election.

“Postpones the EM! Otherwise it will be too late”

For the first time more than 1000 corona deaths in Germany

Gladbach star Florian Neuhaus: should he switch to Bayern?

Neither yes nor no (neue-deutschland.de) 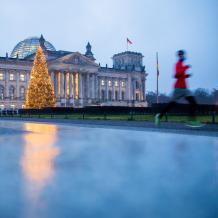 Six personal tips for things to do after Christmas Eve