After the impressive win against Bayern, the soaring Eintracht want to underpin their Champions League ambitions, but also have to back up.

Frankfurt – A few days ago the somewhat unusual and also out of time football player Martin Hinteregger lamented the custom in the sanctuary of a professional team. In the past, said the 28-year-old, people relaxed in the hot tub in the cabin, “had a cozy beer and chatted about the game”. Today it is different, “today everyone is sitting there with their cell phone.” Zero. “I think that’s a shame.” Clear thing.

Eintracht Frankfurt: Hinteregger with a case of beer

But since special occasions require special measures and the Hinti, as everyone calls him, in the Unity hierarchy Has been swept up quite a bit because he is who he is and goes ahead with performance, his wish for football retro and cabin romance was fulfilled early on Saturday evening. Eintracht published a photo on their Twitter account showing the Austrian with a crate of beer, which he dragged into the cabin, smiling blissfully.

The  message: “Greetings from Hinti: We won’t look at the cell phones today!”

In the late winter of 2021, one can even argue about whether such a 2: 1 (2: 0) success is possible Frankfurt unity About the all-round winner Bayern Munich is actually a special event of outstanding importance, after all, the teams have pretty much adapted to each other in their level of performance.

The re are no longer worlds between the Hessians and the Bavarians on the square, which of course has to do with the fact that Eintracht seems to have reached the zenith of its creative power and the Munich people are running out of breath.

The  Frankfurters have won nine of the last ten games, have been unbeaten for eleven rounds, and have only lost two games in total. “That’s for Eintracht Frankfurt extraordinary ”, says trainer Adi Hütter, the architect and moderator of the successful model.

Eintracht Frankfurt: Appearance of the team is impressive

It is above all the way the team performs that impresses. Playful class is paired with mentality and fighting power, embedded in increased self-confidence and a different self-image. In any case, this soaring is not a coincidence. It is the result of a perfectly harmonizing orchestration.

The  thinned six-pack Bavarians had little to oppose the rampant Frankfurters on Saturday, presented themselves limp and drained – at least in the first round. It has seldom been seen that the record champions’ players ran after their opponents in such a faint and unconscious manner, they lost their bearings in the combined hail of unity, were played out, dominated at will; the great Bavarians were literally demonstrated. “We made a fantastic game,” said offensive ace Amin Younes without exaggeration.

The  former German international trumped under the eyes of National coach Joachim Löw phenomenal, was involved in every attack, bursting with ideas and wit (see report on the next page).

The  27-year-old also scored a wonderful goal, which made it 2-0, when he chased the ball with full tension into the gable (31st). Previously had Daichi Kamada the lead achieved (12th), of course on presentation of the again strong Filip Kostic.

Bayern were happy to be allowed to shuffle 2-0 into the dressing room, “we failed to increase to 3-0, 4-0,” said Hütter, who enjoyed an “incredibly dominant game”. Martin Hinteregger summarized the experience once again aptly: “I enjoyed from behind how the boys gambled in front.”

The  chief of defense suspected that this could not continue as soon as he walked into the cabin. “

The y didn’t want to get five again,” he said, referring to the 5: 1 from the previous season. “

The y remembered that well.” And so a similar game developed in the second section as in the first – just the other way around. Now it was Bayern who “almost played against the wall”, as sports director Fredi Bobic admitted.

The  Frankfurter but only swallowed the connection goal by Robert Lewansdowski (53rd), because they fought with flying colors and braced themselves with all their might against the equalizer. This is also a quality feature.

The y should even have been awarded a penalty, but referee Sascha Stegemann’s whistle remained silent when Alphonso Davies kicked substitute Ragnar Ache in the penalty area (79th). Clear 911. Just strange that nobody reacted in the Cologne basement.

The  coach believes that victory with three “bonus points” (Hütter) will give his team “strength and power”. On Friday it goes to Bremen, maybe again with André Silva, who had to pass because of a lumbago and Luka Jovic could not adequately replace.

Although Eintracht lost third place because of the goal difference to VfL Wolfsburg despite the win, the situation is “very tempting”, as Bobic says, due to the impressive series, the form strength and the table constellation.

The  Champions League is no longer a pipe dream, but a realistic goal; Adi Hütter was even asked about championship chances, i.e. the Bayern hunt.

The  51-year-old looked a little confused. But he also says: “Maybe we won’t lose a game at all.”

The re is no doubt that from now on every opponent wants to bring Eintracht down. “We were the hunters, now we are the hunted,” says Bobic. “You have to be able to deal with it.”

The re are worse things.

Sub-zero temperatures: Berlin police have to push the broken down e-bus

“Harms in the fight against Corona”: vaccination dispute in Germany does...

6 wild card games on the weekend

New Year’s Eve: No fireworks in Salzburg this year

Dynamo’s victory guarantee Hosiner will be a dad! “The time... 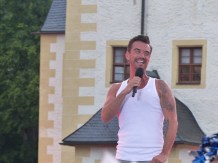 Florian Silbereisen: This woman raves about him now!