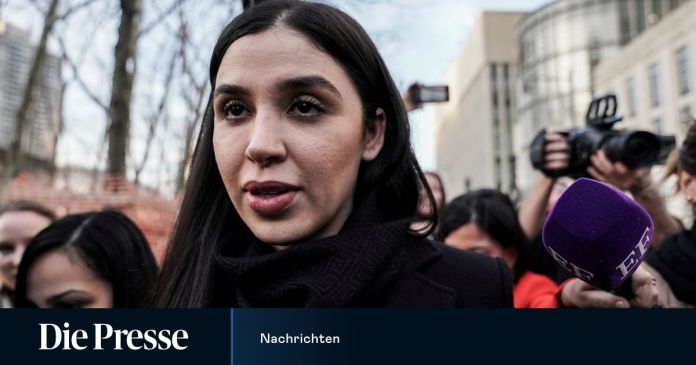 Emma Coronel is accused of participating in a conspiracy to smuggle drugs into the United States.

The  wife of former Mexican drug boss Joaquin “El Chapo” Guzman, Emma Coronel, has been arrested on charges of drug smuggling in the United States.

The  31-year-old was arrested on Monday at the airport of the US capital Washington and will appear there on Tuesday via video link in court, as the US Department of Justice announced.

The  period of time was not initially communicated. She is also said to have helped Guzman escape from a Mexican prison in 2015 and later, before Guzman’s extradition to the USA in January 2017, planned another prison escape.

“El Chapo”, leader of the powerful Sinaloa cartel in Mexico for 25 years, is sitting in a maximum security prison in the US state of Colorado. A court in New York had sentenced him to life imprisonment plus 30 years in July 2019 – Coronel was among the spectators in the courtroom at the time. A jury found Guzman, now 63 years old, guilty of all ten charges in one of the largest drug trials in American history – including involvement in a criminal organization, the manufacture and international distribution of cocaine and heroin, as well as money laundering and the use of firearms.

Due to the corona virus: Everton against ManCity canceled – football...

Sophia Thomalla in a latex Christmas look: “Santa is a woman”

Especially at the beginning of the pandemic: Corona travel restrictions make...

For the first time, RKI reports more than 1,000 corona deaths...

One month later: Another statement from the makers of “Cyberpunk 2077”