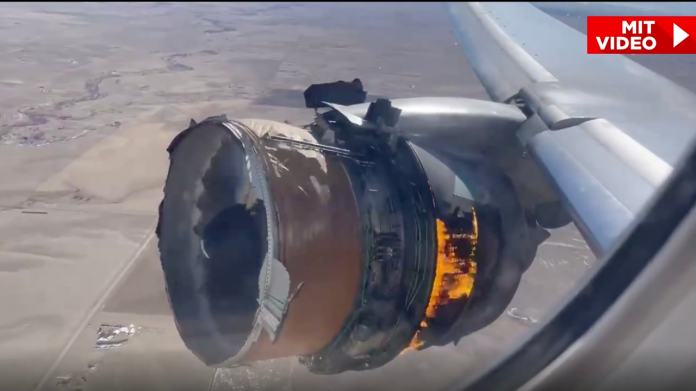 The y are scary pictures. Flames erupt from the engine of an airplane, thousands of meters above the earth …

The  United Airlines Boeing 777 was on its way to Honolulu (Hawaii) when the right engine failed shortly after takeoff in Denver.

The  FAA announced this on request. According to the airline, 231 passengers and ten crew members were on board when the engine caught fire.

According to the police, parts of the machine fell into several residential areas not far from the US city of Denver in the state of Colorado.

The  plane landed safely at Denver International Airport, police in Broomfield said on Saturday afternoon (local time). Nothing is known about the injured.

Police photos showed that a large part of the aircraft had landed in the front yard of a house. Other parts fell on a sports field.

“I’m honestly shocked,” said Broomfield police spokeswoman Rachel Welte. It is “astonishing” that, according to initial findings, nobody in the place was injured by debris.

Police spokeswoman Welte reported that the people were particularly startled by the noise. “A lot of people said they heard this really loud explosion that scared a lot of people, and then they saw what they thought was an airplane falling from the sky, but it was debris.”

It sounded like the sound barrier had been breached, eyewitness Kieran Cain told CNN. Everyone looked up. A “gigantic” cloud of black smoke could be seen in the sky and immediately afterwards the falling parts of the aircraft. “Virtually a shower of pieces falling from the sky,” said Cain.

The  incident is being investigated.

The  Denver case is the second Boeing accident – in just one day!

Aircraft parts also fell from the sky in Holland

Shortly after take-off at Maastricht Aachen Airport, a fire broke out in the engine of a machine – metal parts fell from the sky in the municipality of Meerssen!

An elderly woman was hit in the head and had to be treated in the hospital, police said. A child was also reportedly slightly injured and burned when trying to pick up debris from the floor.

In addition, several cars and houses were damaged by the aircraft parts.

The  full extent of the damage is unclear.

According to the public news portal “NOS”, the Boeing 747 was a cargo plane.

Aaron Carter steps into the boxing ring: He wants to punch...

Defeat for Donald Trump: US judge orders reintroduction of the “Dreamer”... Soccer – Frankfurt am Main – Cup match between Leverkusen and...