The  “Let’s Dance” ensemble will have to do without one of its professional dancers in the future: Erich Klann has decided to turn his back on the RTL show after ten years. He announced this in a detailed Instagram post. In all the seasons – Klann had been there since 2011 – he was allowed to learn a lot about himself, “about the show world, about successful people, interesting personalities and long, hard training days”. Now it is time for a “change” that “should take place with my family”.

Klann had already decided in December 2020 to leave “Let’s Dance”. In the months before, he would have had a few questions to think about, such as: “How long will I be away from my family for what feels like an eternity?” or “When do I have the time to build a house and finally get married?”.

“Let’s Dance” is a “time-consuming project and requires my full attention over several months”. Klann “reluctantly handles important personal and professional tasks and requirements only half-heartedly”.

After “Let’s Dance” exit: Erich Klann plans the future with his family

The  33-year-old is planning to work “on a long-term project” with his partner, professional dancer Oana Nechiti, with whom he has a son. He now wants to devote himself to his fitness, his dance school, new TV formats, his own home and family tasks. A separate podcast is also being planned.

With Nechiti and son Nikolas he will “watch ‘Let’s Dance’ every Friday and – as you do at home – be amazed, cheer, annoy, languish and judge … just wear professional glasses!” He wishes his colleagues “continued strength and endurance”, and addressed many of them personally.

Erich Klann has been part of the regular cast of “Let’s Dance” since season four. He won the show twice: in 2012 with Magdalena Brzeska and in 2016 with Victoria Swarovski. In the other seasons he danced with Simone Ballack, Lilly Becker, Cora Schumacher, Judith Williams and most recently with Ilka Bessin.
© 1&1 Mail & Media/spot on news

This news has disappointed some fans: Massimo Sinató will not compete in “Let’s Dance” in 2021 due to the pregnancy of his wife Rebecca Mir. At the introductory show on February 26th, he will still dance once. © ProSiebenSat.1

Away at bottom of the table – KAC has to play...

Germany: Bavaria is putting a stop to skiing for now –... Wirecard scandal: stock trading is doomed by Bose, head of the... 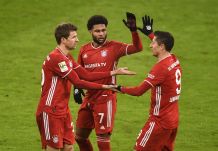