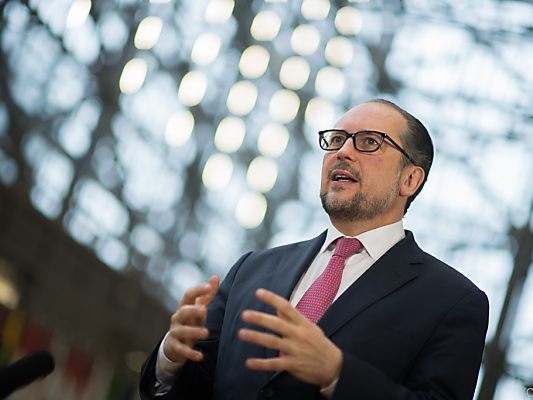 
Schallenberg represents Austria at the EU Foreign Ministers Council
© WHAT

The  foreign ministers of the EU countries will discuss the latest developments in the Alexei Navalny case and the situation in Myanmar this Monday (9.15 a.m.). According to diplomats, the meeting in Brussels is expected to launch new sanctions. For example, you could meet those responsible for the imprisonment of the Russian opposition politician and the leaders of the recent military coup in the Southeast Asian country of Myanmar.

A video connection with the new US Secretary of State Antony Blinken is also planned on the sidelines of the EU deliberations. It is said to be about relations between the EU and the US after the change of power in the White House. During the tenure of US President Donald Trump, the relationship between the EU and the US was extremely tense. His successor Joe Biden now wants to change this again.

Other topics at the meeting of foreign ministers are efforts to save the international nuclear agreement with Iran and an EU initiative to strengthen a common European security and defense culture. Foreign Minister Alexander Schallenberg (ÖVP) is expected to attend the talks for Austria.

In the Navalny case, the EU has been demanding the release of the Kremlin critic for about three weeks now, without success. Moscow rejects this as interference in internal affairs.

The  44-year-old was convicted in Moscow at the beginning of February because, in the judge’s view, he repeatedly violated probation conditions in previous criminal proceedings in 2014 for fraud and misappropriation of funds. In an appeal process last Saturday, the judiciary confirmed the imprisonment in a prison camp. Also on Saturday Navalny was fined for allegedly insulting a World War II veteran.

The  opposition politician had previously decided to return to his home country in January, even though he was the victim of an attack there last August with the neurotoxin Novichok, which is banned as a chemical weapon. He was then arrested on arrival.

Luxembourg’s Foreign Minister Jean Asselborn accused Moscow of being aggressive and unrealistic in the Navalny case. Relations between the EU and Russia have been in a serious crisis since the annexation of Crimea in 2014. “Unfortunately it seems as if we have not yet reached the lowest point,” said Asselborn to the editorial network Germany (Monday). Russian Foreign Minister Sergei Lavrov does not even want to rule out that his country will break off relations with the EU. “That goes deep,” says Asselborn. “I can understand anyone who asks himself with concern: Are we heading for a new Cold War?” However, the EU will not tolerate violations of human rights. “

The re will be no appeasement in this matter.”

Even before the EU ministers’ talks began, the first threat from Moscow was on the table. Russia’s EU ambassador Vladimir Chizhov warned Europeans of new sanctions against his country. “If and if that happens, we will be prepared to answer,” he told the “world” (Monday). “In any case, Russia’s actions will be based on facts and analysis rather than guesswork and emotions,” he announced. Many of the EU’s decisions have so far been “illogical and astonishingly politicized”.

Because of the attack on Navalny, which was then dealt with in Germany, the EU had already imposed entry and property bans on people suspected of being responsible in the vicinity of President Vladimir Putin last year. In Brussels, it is assumed that government agencies in Russia are behind the attack.

The  coup in Myanmar is also seen as unacceptable in the EU.

The  military had overthrown Nobel Peace Prize laureate Suu Kyi, who headed a government made up of civilians and the military, in early February. At least two protesters were killed in protests against the military coup over the weekend, according to media reports. It was also reported that a 20-year-old student who was shot by forces in the capital, Naypyidaw, died of severe head injuries.

The  EU foreign affairs representative Josep Borrell condemned the actions of the military and the security forces again on Saturday and called for an immediate end to the violence against civilians. According to the Spaniard, the discussion at the foreign ministers’ meeting this Monday should enable “appropriate decisions”.

After allegations of bullying: Amira Pocher shoots at critics

“DSDS”: Candidate back at Bohlen after ten years – jury completely...

Marcus Thuram: Gladbacher spits directly in the face of his opponent