Eugenie von York and Jack Brooksbank became parents for the first time in February – now they finally reveal the name of their child.

It is probably the best news that the British royal family has received this year: Eugenie von York (30) and Jack Brooksbank (34) have become parents for the first time. Her son was born on February 9 at 8:55 a.m. UK time, Buckingham Palace announced in an official statement. Mother and child are doing well, the statement said, and we also learned that Papa Jack could be there for the birth. But as is tradition in the British royal family, we had to wait for one detail: the name of the new family member.  The  new parents have finally revealed it and we are absolutely thrilled!

We show you the first portraits of the Brooksbanks as a family of three in the video above – it’s unbelievable that Eugenie only gave birth to her little treasure eleven days ago.


Eugenie of York
Royale well-wishers: You are all happy with her
Great joy in the British royal family! Eugenie von York and Jack Brooksbank became parents for the first time. And some royals congratulated on the birth.

When a royal baby is on the march, two questions always arise: what gender is it and what name will it have? In Great Britain, numerous betting shops are even running hot in this regard, with thousands of citizens betting money on the royal baby. And even before the birth of Eugenies and Jack’s offspring, there were already name predictions.

As the parents-to-be announced, their son bears the beautiful name August Philip Hawke Brooksbank. In her Instagram story, Eugenie also reveals the background behind the name. “On his grandfather’s birthday weekend, we introduce you to our little boy. He was named after his two great-grandfathers,” said the young mother. Who would have expected it?

Princess Eugenie immediately shared her happiness with the world on her Instagram account and showed a first photo of her baby. You can watch the Mini-Royal in the video above.

Princess Eugenie: Your baby won’t have a title

The  members of the royal family who are not in a direct line to the throne no longer have a title.

The  titles are also traditionally inherited through the male line, so that Eugenie’s son, like many other members of the royal family, will not have a title.

The  baby’s baptism is also still uncertain, as Royal expert Ingrid Seward (73) told the British newspaper “Daily Mirror”. “I think the new baby will be baptized in Windsor in the private chapel. But the times are uncertain. Eugenie can even opt for a private service instead at the Royal Lodge, where Beatrice got married. Regardless, I don’t think so they will have a big baptism. It just wouldn’t look right during a pandemic, “says the expert. So we can be curious how the royal offspring will go on and look forward to countless photos from Eugenie’s and Jack’s private photo album.

Here you bring your baby home! Check out the adorable shots of the little family in the video below.

Lower Saxony: This applies from January 11th for schools and daycare...

Biden does not want to lift the entry ban from Europe 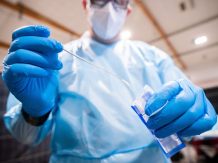 Mass test in Lower Austria: 0.14 percent positive on the weekend...

Rapid Vienna returns to winning ways with an away win against...