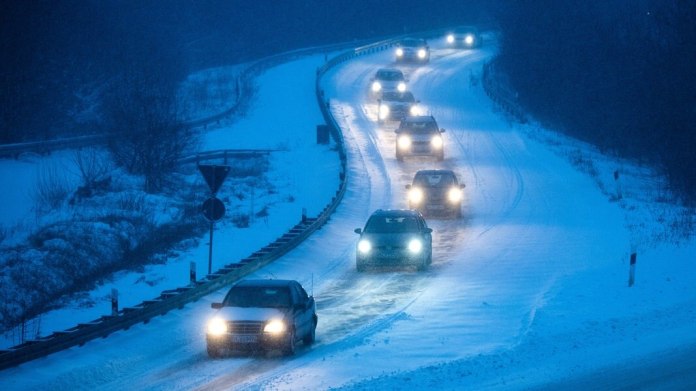 While until yesterday in many parts of northern Germany it still looked as if the winter weather with lots of snow and icy wind would cause problems mainly in southern Lower Saxony, it is now clear that large parts of the rest of northern Germany will not get away unscathed.

The  snow in Schleswig-Holstein is spreading from Fehmarn to Heide during the day, said meteorologist Frank Böttcher in an interview with NDR Info: “In some places it can be up to ten centimeters.” In Mecklenburg-Western Pomerania, too, it is not just snowdrifts on Rügen: “

It hits homeless people especially. That is why the winter emergency programs in Hamburg are also open during the day. 2 min

According to Böttcher’s forecast, northern Lower Saxony is getting very little. It is getting cold especially in the south of Lower Saxony: “We expect the lowest temperatures from Tuesday to Wednesday in southern Lower Saxony. It can get down to minus 25 degrees here. For the whole of the north, the meteorologist expects permafrost for the next seven days.

Snow continues to cause traffic obstructions

In part, the snow in Lower Saxony is already 30 to 50 centimeters high. Snow drifts continue to occur on many roads there – even the highways. A traffic jam has currently formed on the A7 between Göttingen-Nord and Nörten-Hardenberg because many truck drivers had to stop their vehicles due to snowfall.

The  highway police had to wake up drivers who had gone to sleep because of the long wait. A supply station with hot drinks will be set up in a parking lot, the police said. On the A2 there are currently traffic jams in several places due to rescue work after accidents. Some state and district roads in northern Germany are closed or not passable. You can find out the current situation on the streets around the clock in the NDR traffic service.

The  constant snowfall is also a problem for many flat roofs and rail traffic is likely to remain severely affected. 4 min

Not only in Lower Saxony, but also in Schleswig-Holstein and Hamburg is warned of slipperiness. In northern Schleswig-Holstein, especially in the Schleswig-Flensburg district, there were snow drifts. This also bothered motorists on the Baltic Sea island of Rügen (Mecklenburg-Western Pomerania).

The re and in and around Ostholstein in Schleswig-Holstein there is likely to be a storm warning for the whole of Tuesday due to expected snow masses and drifts.

The  so-called lake effect is responsible for the snowfall: squalls bring moisture from the lake, which falls over land as snow. According to weather experts, this also explains why large amounts of snow fall in some parts of the country and not in others.

It remained very windy, especially on the coast. Hydrodienst Hamburg announced yesterday issued a storm surge warning for the Schleswig-Holstein Baltic Sea coast – it was lifted last night. In Lübeck and Travemünde the water of the Trave sloshed over its banks early Monday afternoon. Floods also had to be expected at Rügen and in Greifswald and Stralsund.

Many a train was stopped by heavy snowfall.

Regional and long-distance traffic is only slowly getting back on track. “Unfortunately, we still expect restrictions on Tuesday,” said a spokeswoman for the Deutsche Bahn on Monday. Still doing icy points, frozen overhead lines and snow drifts, many stretches are impassable.

The  train advised travelers to find out about connections on the Internet before starting their journey. Even with the Rail hotline (0 8000) 99 66 33 there is information about the current situation.

Even with the railway operators metronome, enno und erixx, the traffic situation was still tense yesterday evening. Individual trains were able to run again, but with delays.

Federal Transport Minister Andreas Scheuer appealed to the citizens of northern and central Germany to refrain from traveling at least until Wednesday. “In such extreme conditions, even the best point heating and the best clearing vehicle can reach their limits,” said the CSU politician to the newspapers of the Funke media group.

Because of the strong east wind, many ferries to the East Frisian Islands are canceled – even today. Among other things, the ferries to Baltrum and Wangerooge are affected.

The re are also restrictions on ferry traffic to the North Frisian Islands. Passengers are strongly advised to find out about current cancellations and postponements online on the shipping company’s website before starting their journey.

The  Ferry shipping company Scandlines canceled all trips between Rostock and the Danish Gedser for Monday due to the strong east storm. Ferry traffic was maintained between Puttgarden and Rødby.

The  ferry service between Rügen and Hiddensee has also been suspended for the time being.

At most schools in Lower Saxony, face-to-face classes have been canceled for today.

The  districts communicated this almost everywhere, with the exception of the north of the state.

The  failure affects the general education schools and the vocational schools, it said. Emergency care is guaranteed. Closing schools does not mean that there are no lessons – homeschooling is taking place. You can find an overview of the affected regions here.

Danger to life: ice surfaces do not hold up yet

Even if it can be tempting: Under no circumstances should you step on the ice, warned Meteorologist Böttcher.

The  ice is still very thin – despite the low temperatures. Practical advice: people should bring in the crates of drinks, beer bottles burst at these temperatures. In addition, you should empty and turn off the outside taps. Exercise in the fresh air can also be dangerous when it is extremely cold. When going outside there is a welcome side effect in times of pandemics: a mask also protects the face from the cold.

What will the weather be like today, tomorrow and in the coming days in the north?

In which region is the next storm threatened? Here are the current warning messages from the German Weather Service. more

The  strength of the wind is measured in Beaufort.

The  storm scale ranges from calm to hurricane. Our picture gallery reveals how the individual levels differ. Picture gallery

The  winter of 78/79 plunged the north into chaos with icy cold and a lot of snow. more

After a break due to Brexit: DB Schenker is restarting land...

Black Lives Matter Movement in the “Power 100” art ranking ahead

PS Plus: March 2021: Download Final Fantasy VII Remake and other...

Who are the 12 candidates anyway?

Coronavirus mutation: examination in Saxony possible in a few weeks