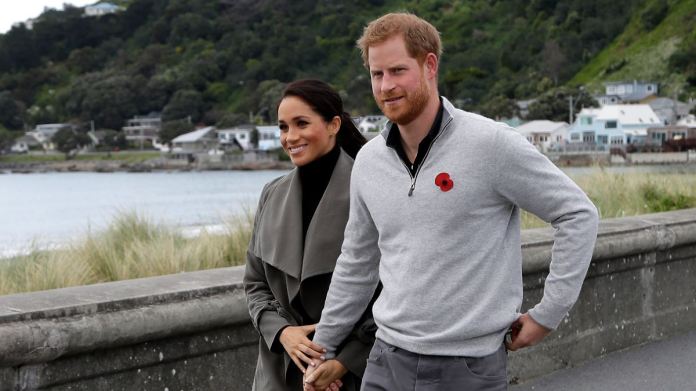 While the British are still mourning them, Harry and Meghan are already pursuing new projects.  The  not so royal couple has landed a million dollar deal with Spotify. In a surprise appearance for the streaming provider, they are now stealing the show from others.
A second child, the final farewell to life as a royal, and a supposed disclosure interview with Oprah Winfrey. Prince Harry and Duchess Meghan have been in the past and will be busy in the coming days. Nevertheless, the couple still found the time to turn up completely surprisingly at an event organized by the Swedish streaming provider Spotify.

In a two-hour video entitled “Stream On”, with which Spotify advertises its wide range of music and podcasts, the voices of Harry and Meghan can suddenly be heard.

The  background: With their recently launched “Archewell Audio”, named after their son Archie, they themselves produce podcasts for the platform.

“We use podcasts to hold rousing conversations,” only Meghan’s voice can be heard at first. Her husband adds: “

The y inspire, challenge and enlighten.”

The  picture then changes to the two ex-royals who have landed a million dollar deal with the streaming platform and are sitting comfortably in their living room in California.

“We founded ‘Archewell Audio’ to ensure that the voices of those whose stories would otherwise not be heard are heard,” continues Meghan. “And the most important part is creating a community where everyone is encouraged to share their own vulnerabilities in a safe environment.”

Prince Harry and his Meghan take just 20 seconds of the almost two-hour long video, but they steal the show from other celebrities such as Justin Bieber and ex-first lady Michelle Obama. It is unclear when her contribution to “Stream On” was recorded, but Meghan’s baby bump seems to be very small.

The  couple will be seen and heard on March 7th for far longer than a few seconds.

The n her highly anticipated interview with US talk show legend Oprah Winfrey will air.

Last Friday, Kensington Palace made public that Harry and Meghan will no longer return to their royal duties in the British royal family. In London one should be very unhappy about the interview. After the final exit, however, the Queen no longer has any influence on the content of their conversation.

The  couple should therefore be happy that everything is now under wraps.

Germany now has a higher corona death rate than the USA

Corona: When do the new rules apply in Germany?