On Tuesday, David Alaba officially announced his departure from FC Bayern at the end of the season. According to his own statements, the 28-year-old is looking for a new sporting challenge. According to the Austrian, however, financial aspects played no role. According to recent media reports, this is not entirely correct.

At a press conference, Alaba spoke in detail about his motives to leave Bayern after 13 years.  The  defensive specialist explicitly ruled out that he would leave Munich for the money. Especially with the FCB fans this statement caused a lot of anger, because hardly anyone believes Alaba that this is “just looking for a new challenge”. Alaba also disagrees with “Sport BILD” reporter and Bayern insider Christian Falk.

“It was mainly about the money”

At “BILD Live”, Falk emphasized that it should have been “primarily about the money”. Accordingly, there were always problems with the subject of salary during the contract talks with his advisor Pini Zahavi. At the beginning of November, the Bayern bosses pulled the rip cord and finally withdrew their contract offer. According to Falk, there were other reasons, such as the “lack of appreciation” and the desire that Alaba should be allowed to play in the central midfield, a position that he was probably guaranteed in the past. Nevertheless, for Falk it is clear: “If the price had been paid, Alaba would have liked to stay with FC Bayern.”

More FC Bayern news and stories are available at fcbinside.de

Flensburg Bahnhofswald: tree felling until late in the evening

Herrmann and Bestaven are supposed to save colleagues

WhatsApp will soon no longer work on many smartphones – including... 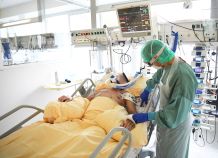