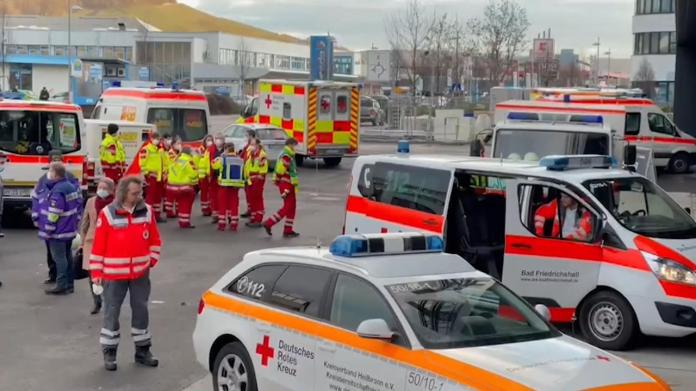 It happened again: after four people were injured in letter bomb explosions on February 16 in Eppelheim and a day later on February 17 in Neckarsulm near Lidl, a third explosion was prevented. As confirmed by investigators of the dpa, a third letter bomb was intercepted in a parcel distribution center at Munich Airport.

The  explosive device was defused on site.

The  bomb is said to have been addressed to the food company “Hipp”.

In the video you can see the pictures after the explosion in the parking lot of the Lidl headquarters.

Neither Munich Airport nor the parcel distribution center wanted to comment on this information when asked. So far, the investigators suspect that at least one bomb was sent from Ulm.

Profiler considers perpetrators to be unscrupulous

In the RTL interview, profiler Axel Petermann explains how dangerous he thinks the perpetrator or perpetrators are. From the expert’s point of view, whoever sends the explosive devices runs a great risk of injuring uninvolved people.

The  perpetrator sends letters with explosives and of course he cannot control when these letters explode and when there is an explosion,” explains Petermann. “That can be by post, that can be during the distribution of the mail and then of course bystanders could also be injured or possibly even killed.” With this, the sender proves a certain unscrupulousness, says the profiler.

Was the dispute over personnel issues the reason for the explosive device at Lidl?

Before the explosion at Lidl’s headquarters in Neckarsulm, threatening emails with specific demands on personnel issues are said to have been received for five to six months, as RTL learned from a reliable source. In the emails, further steps were threatened if the demands were not addressed. Internally, a pipe bomb was assumed.

The  Wild works, which had an explosion the day before, are a Lidl supplier.

After the two explosions and the suspicious find in Bavaria, the police assume a serial act. “It can be assumed that there is a connection between these three parcels,” said the Baden-Württemberg state police chief Stefanie Hinz. She did not provide details on possible suspects, letters of confession or further investigations.

State Interior Minister Thomas Strobl (CDU) was also convinced: “I already had a suspicion after the second case, and after the third case, too,” he said.

The  investigation was in full swing. All shipments were addressed to food companies.

On Tuesday, an employee of a beverage manufacturer in Eppelheim (Rhein-Neckar-Kreis) suffered a bang when he accepted a package in the receiving department.

The re were three injured on Wednesday when there was an explosion when opening a letter at Lidl’s headquarters in Neckarsulm (Heilbronn district). According to Strobl, all the injured have been discharged from the hospital.

Apple Watch 5 falling in price: The smartwatch is getting cheaper

Violence in families is increasing