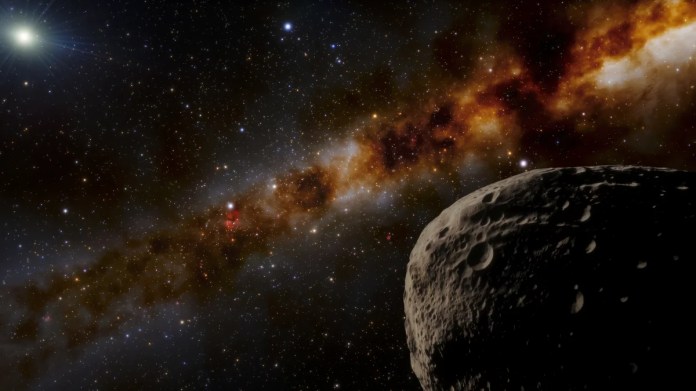 With a maximum distance of 175 astronomical units or almost 20 billion kilometers from the sun, the celestial body FarFarOut is actually the most distant object in the solar system that we know. This has been confirmed by a group of researchers who have been looking for a ninth planet for years and are finding celestial bodies at the edge of the solar system that are increasingly distant.

The y discovered the celestial body, temporarily baptized FarFarOut (English for “WeitWeitDraußen”) two years ago, and have since analyzed its exact orbit.

The  International Astronomical Union has it now on 2018 AG37 baptized.

The  team led by Scott Sheppard (Carnegie Institution for Science), David Tholen (University of Hawai’i) and Chad Trujillo (Northern Arizona University) is responsible for the discovery. For years you have been looking for a ninth planet far beyond the dwarf planet Pluto. Objects like Eris, “Kobold” (2015 TG387), “FarOut” (2018 VG18) and now FarFarOut are more than just by-products of this search.

The se celestial bodies orbit the sun at such a great distance that they are not significantly influenced by the gravity of the gas giants Jupiter and Saturn.

The ir trajectories can provide clues to objects that have not yet been discovered. At the same time, they orbit so far out that long observation times are necessary to analyze their orbits.

With the Gemini North telescope in Hawaii and the Magellan telescopes in Chile, the researchers have now been able to confirm that FarFarOut actually trumps the previous record holder, FarOut, in terms of distance to the sun. According to this, the object is currently 132 times as far from the sun as our earth, but is up to 175 AU. For comparison, Pluto comes to an average distance of 39 AU. On its orbit, FarFarOut also approaches the sun by up to 27 AU, which is even within the orbit of Neptune. He will probably interact with the planet again in the distant future. FarFarOut therefore needs around 1000 years for one orbit around the sun.

The  scientists also explain that they estimate the celestial body to be around 400 kilometers in diameter based on the data collected.

The y are optimistic that further out there are more so far undiscovered celestial bodies.

The  distance record will probably not last for long either (which you will hopefully keep in mind with your naming system). As soon as the orbit is even better known, FarFarOut will get a real name from the International Astronomical Union anyway.

Ski jumping: “The most difficult jump” is still waiting for Stoch...

100 young people clash with the police

The latest on the corona crisis – EU Commission puts pressure...