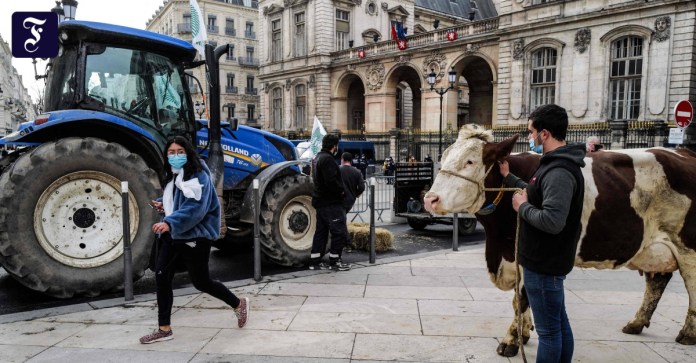 BWithout salad, followed by an herb omelette on organic spinach with bechamel, cheese and fruit: This is the standard menu for the school canteens in Lyon on Tuesday, which provoked a nationwide storm of indignation. The meat-free food that the green mayor of the third largest French city has decided for school children due to stricter corona rules is not to the taste of leading government members. “We shouldn’t put ideology on our children’s plates,” said Agriculture Minister Julien Denormandie.

The standard menu is a “social disgrace” and “ludicrous with a view to a balanced diet,” said the minister on Tuesday on the RTL radio station. He challenged the Greens to maintain an “ecology of isolation” that “is at the expense of the weakest who cannot afford a balanced diet”. In his opinion, a portion of meat is part of a balanced diet.

Mayor Grégory Doucet had previously explained that he had decided on the meat-free standard menu in order to facilitate the distribution of food in the school canteens and to improve compliance with the stricter distance rules. “Fish and animal proteins are planned,” emphasized Doucet. Usually there are several menu options that take into account religious dietary regulations, especially those of Muslim students, but also food allergies.

But the Minister of Agriculture does not understand why meat should be avoided. He said that he called the prefect to check the legality of the measures. The minister knows that the agricultural lobby is on his side. On Monday afternoon, a dozen farmers drove with tractors in protest in front of the imposing town hall of Lyon.

“No Christmas tree, no Tour de France, no meat in the canteen, what’s next?” Asked the chairwoman of the FNSEA agricultural association, Christine Lambert, on Tuesday on the Public Sénat television channel. She alluded to the fact that the green mayor of Bordeaux did not put up a “dead tree” in front of his town hall during Christmas time and that the mayor of Lyon criticized the cyclists on the tour as “machos” and had skipped a stage through Lyon. Oberender will remain director of the Berliner Festspiele until 2026

Chinese quantum computers are said to be 100 trillion times faster...

The Viking sandpit “Valheim” is the game of the hour