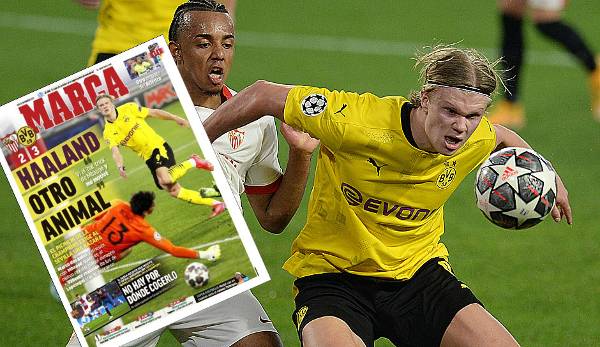 As (Spain): “Haaland sweeps away Sevilla! Sevilla are defeated by BVB – or better Erling Haaland, who destroyed Seville’s dreams in the first half with two goals and one assist.

The  Norwegian was too much for Sevilla.”

MUNDO DEPORTIVO (Spain): “Haaland destroys Seville’s dream! With two goals, the Norwegian paves the way for Seville to the quarter-finals, which now have to win in Dortmund by two goals.”

SPORT (Spain): “Sevilla will get away with a black eye at the Haaland Festival. After a disastrous first half, de Jong’s goal gives some hope.”

The  Norwegian striker with a brilliant first half that gives BVB an advantage in the second leg. Dortmund set a pace in the first half that Seville cannot keep up with.”

EL MUNDO (Spain): “De Jong keeps Seville alive! Seville with one of the worst games of the season. A determined Haaland and Borussia Dortmund defeat Lopetegui’s team, but with de Jong they still have a glimmer of hope for the second leg.”

Guardian (England): “Haaland brace creates a high hurdle for the Spaniards in the second leg.”

The  advantage could be greater, but the dragon turns the old lady into an old man.”

Fluffy animal in dirty fur: that’s why pandas like to wallow...

Processes have a great advantage

Until March 28: Germany extends the lockdown

With Keanu Reeves through dystopia

WAC wants to get at least one point from CSKA in...