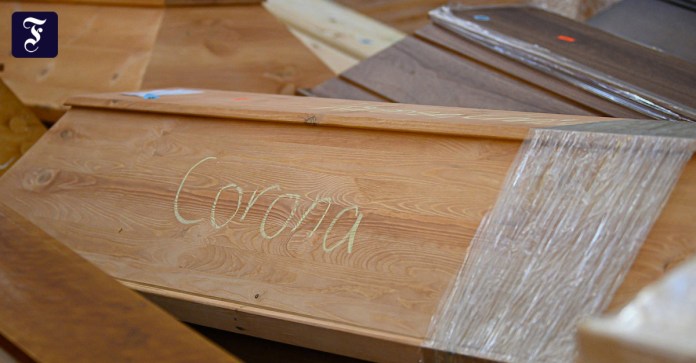 Mr. Kalbitzer, the soccer coach Hansi Flick recently scolded the “so-called” Corona experts and called on politicians to take care of “that you can say something positive”. As a psychiatrist, do you think that too much horror scenarios are being used in the Corona crisis?

Absolutely. If one suffers from severe or prolonged anxiety, this can have two consequences: one becomes overly sensitive, or one becomes dull.

The se are both consequences that we cannot use in such a crisis – especially if it lasts so long. In the beginning the fear still worked.

The  first lockdown had an effect even before it started. But in November it took a lot longer. Perhaps the mutations now have a similar effect as the pictures from Bergamo a year ago. But fear of people cannot be a long-term solution. We need a positive narrative in which you look at what we have achieved together. It is an amazing achievement that we have a vaccine. Also remarkable is the discipline of each individual who avoids death through severe restrictions in everyday life. You have to make that clear.

But that’s not how you get people to be careful, does it?

Let me give you an example. It doesn’t work to say for a year: Stop meeting each other! We need social contacts, especially children. I’m not a virologist, but the way I see it as a medical professional, it is perfectly acceptable to hug each other outdoors if you have done a quick test and are wearing an FFP2 mask. One cannot overestimate the importance of such a hug. I would like to see people explained how they can do certain things and keep the risk low. Instead, warning of danger is preached in many areas of renunciation. That doesn’t work in the long run. And it creates an extremely negative mood.

Christian Drosten warned in January that in the worst case scenario we could have 100,000 new infections per day in summer. Should he keep it to himself if he fears it – so that the mood stays good?

No. He must clearly state what risks are imminent. But it’s a question of the language you work with. What Drosten does very well is weighing up: It could come this way, and it could come this way. Politicians make decisions on this basis. Drosten also repeatedly states the limits of his expertise and corrects himself if necessary. That’s why he’s such a brilliant expert in this crisis.

On February 13, the SPD politician Karl Lauterbach warned of the danger that in the next few months a wave of the corona mutation that occurred in South Africa could run “through those who have already been vaccinated and those who have not yet been vaccinated”. This must be prevented “by all means”. A day later Lauterbach reported a wave of hate with death threats. Why do people react so emotionally?

This type of aggression cannot be justified. But basically I see it critical when some experts do not clearly differentiate between their personal opinion and the facts with which they are well versed. Virologists, for example, are responsible for a small part of this crisis, namely for the question of how to get infected and where. When they use their knowledge from laboratories to enforce their private opinion, it annoys people.

The  responsibility of experts is to distinguish between their private opinion and their expertise.

In autumn, Chancellor Angela Merkel warned of 20,000 new corona cases a day, Karl Lauterbach of more than 200 corona deaths every day. Both were criticized as scare-mongers – but the forecasts were even exceeded.

20 people were on board: the missing boat has disappeared without...

Corona in the North Friesland Clinic: 1,500 people in quarantine |...

Is Ronald Watkins the anonymous “Q”?