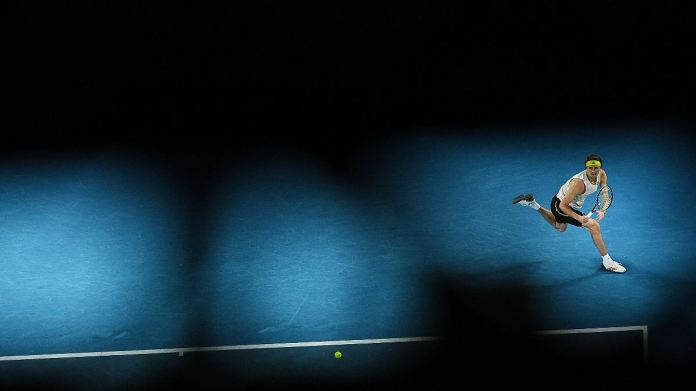 A qualifier would have waited in the semifinals, but Alexander Zverev missed the round of the last four at the Australian Open. A lot looks like a victory for the German tennis star against Novak Djokovic, but then the number 1 in the world strikes back.
With the final chance in mind, Alexander Zverev did not find his way to his second semi-final at the Australian Open against number one. In a tennis match that had been strange for a long time, the world number seven was defeated by defending champion Novak Djokovic 7: 6 (8: 6), 2: 6, 4: 6, 6: 7 (6: 8).  The  23-year-old from Hamburg gave away the great opportunity in Melbourne to fight for his first Grand Slam title again after the US Open final that had just been lost last year.

“He knocked on the door. One or two mistakes at an inconvenient moment made the difference,” said Boris Becker, TV expert from Eurosport, about the match with a lot of ups and downs. “Up to the last point it would have gone in both directions can, “said Djokovic on the pitch.

The  winner, who is suffering from an abdominal muscle injury, will surprisingly meet Russian qualifier Aslan Karazew in the semi-finals on Thursday.

The  German number one was also not free of symptoms recently. “

The  stomach and Sascha are doing very well,” said Zverev’s older brother Mischa before the match at Eurosport. Zverev had problems with the abdominal muscles, but probably not as much as Djokovic.

The  33-year-old had declared after the last two matches that he would have withdrawn from a tournament other than a Grand Slam. Less than two weeks after the narrow three-set defeat at the ATP Cup in the same place, Zverev managed a tailor-made start with the quick 2-0.

Djokovic chops up the bat

In the Rod Laver Arena, which holds 15,000 spectators but is almost deserted, the eighth duel between the two initially developed very differently than the previous one. Djokovic was often quick to make a decision for his circumstances. With reference to his complaints, he had announced that he would adjust his playing style a little. “I don’t think I’ve ever seen him score points so quickly, especially on the forehand side,” said Becker, astonished.

The  Wimbledon winner knows Djokovic very well from his three years as his coach.

The  eight-time Australian champion fended off a set ball to make it 3: 6, then suddenly managed to equalize to 5: 5 with the usual consistency. “That is the normal way of playing, with patience and length,” said Becker in the tight tie-break. This time Zverev wanted to serve with full power for the first time and used the third set ball.

But Djokovic was now better in the match and reacted in the style of a 17-time Grand Slam champion. After a lightning-fast 4-0 lead, he equalized, Zverev responded with the 3-0 in the third set. Because he did not succeed in the rebreak, the until then completely calm Djokovic hacked his racket. But with two double errors, the previously stable Zverev then gave up the lead and stopped playing. Djokovic roared his joy at the 2-1 set lead – and let Zverev move away again.

The  3-0 lead was gone again immediately, in the intense and long-time high-class game, the world number one defended a set point with an ace and made the decision in the tiebreak again with an ace after 3:31 hours. Against Karazew, Djokovic is now the clear favorite.

Gross takes over as coach at Schalke 04 – Germany

Seven students were killed in a fall from the fourth floor...

First neutrino from a torn star – high-energy “ghost particle” was...

In short: Incentives should motivate people to take part in further...