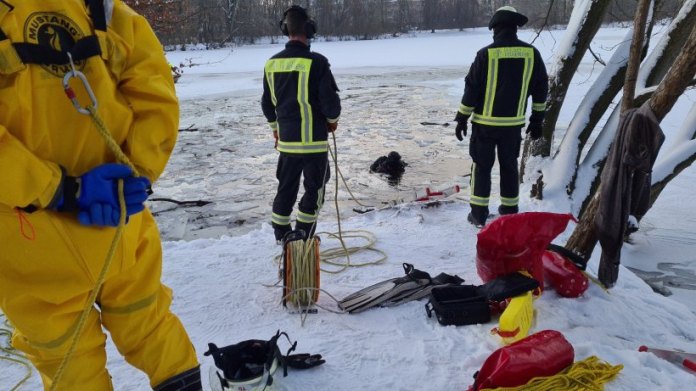 Treptower Park: man had an accident while ice bathing in the lake

In Treptower Park a man had an accident while ice bathing in a lake.

The  fire brigade is looking for him with divers.

Berlin. In Alt-Treptow there was an accident in Treptower Park on Wednesday morning at the frozen carp pond. Three men had climbed into an ice hole to bathe in the morning, said fire department spokesman Dominik Preetz in the morning of the Berliner Morgtenpost.

According to the spokesman, one of the three men got under the ice and has been missing since then. Two of them had therefore already gone back to the bank by the time the fire brigade arrived. You were hypothermic, but your life is not in danger.

The  first emergency call was received at 8:52 a.m.

The  fire brigade is on site with 52 emergency services to look for the missing person in the freezing cold. Fire service divers are also on site. Rescue workers took a boat out onto the lake to break up the ice surface with a chainsaw. A drone equipped with a thermal imaging camera is also in use. After several hours of unsuccessful search, the chance for the ice rescuers to find the man still alive is dwindling, as fire department spokesman Preetz told the morning post.

No information was available on the age of those affected.

The  carp pond in the park is south of the Soviet memorial.

First, the fire brigade tweeted that people had broken into the ice.

The  fire brigade urgently warns against stepping on ice surfaces.

The re is danger to life.

Even more games will be released in March 2021

Is slack down? Chat program affected by several glitches

Thomas Oberender will remain director of the Berliner Festspiele until 2026

Berlin & Brandenburg: Eastside increases in the final tournament: 3-1 against...

Who is actually Djamila Rowe? Laschet: The CDU chief raves about the incidence value – opinion