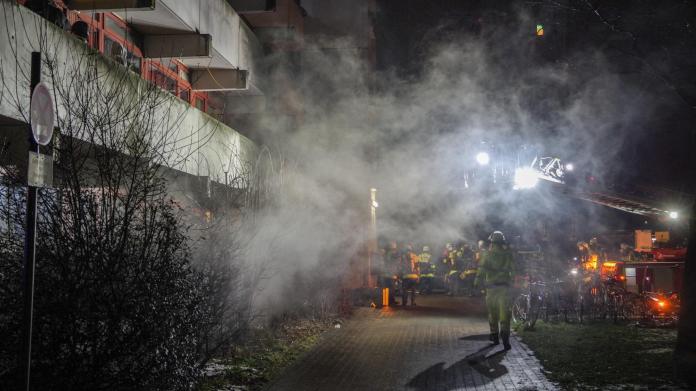 23-year-old is in mortal danger

According to initial information from the fire brigade, the cellar fire caused thick smoke that dragged up the stairwell to the sixth floor.

The  fire itself was quickly brought under control.

The  emergency services searched the building and came across the two seriously injured. A 23-year-old woman had to be resuscitated, her life is in danger. She had passed out on the way down from her apartment on the sixth floor on the fourth floor.

Nothing is currently known about the condition of the other seriously injured man. Three students were slightly injured, one of them was admitted to a clinic and the other two were treated on site. 25 residents were cared for in an ambulance for the duration of the operation.

The  fire brigade was deployed with around one hundred men.

Fire in the sauna – cause unclear

According to the police, the fire broke out in the sauna area in the basement, and the fire investigators have yet to determine the exact cause. Two apartments cannot be used for the time being.

The  amount of the damage is in the six-digit range.

Note: In an earlier version of the article, we reported that one of the injured people died. Contrary to the agency’s information, this has not yet been confirmed.

Winter is coming back – watch out, black ice!

Corona mutation in Germany: Virologist Drosten worried – “Then we have...

Competition for DHL? This is how Hermes wants to become...

Covid vaccination plan: In a good two months, it will be...

1: 1! Rapid remains without a win against Austria in...

The ZSC Lions deployed five foreigners as if nothing was there