After immunization with the AstraZeneca vaccine, according to Federal Health Minister Jens Spahn, a re-vaccination with another active ingredient is conceivable at a later date. This is “possible without any problems” if, by the end of the year, all those willing to be vaccinated are vaccinated and the vaccine is still available, said the CDU politician on Saturday at a question and answer session with citizens.
The  President of the Paul Ehrlich Institute (PEI) responsible for vaccines, Klaus Cichutek, however, said that nothing was known so far about “whether you can take another vaccine later in order to have the appropriate protective effect again maybe in a year to boost “. However, clinical studies have already started.

The  question of a re-vaccination with another agent is in the room because the active ingredient from AstraZeneca is less effective than the other two vaccines approved in the EU from Moderna and BioNTtech / Pfizer.
A few days ago, Carsten Watzl, Secretary General of the German Society for Immunology, suggested a later vaccination. “You can later boost the immunity that you triggered with the AstraZeneca vaccine with an mRNA vaccine without any problems.” (dpa) 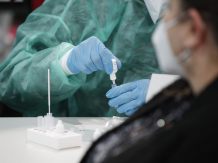 The slowness of the rapid tests: Do not wait until Spahn “comes out of his head”

Coronavirus in the capital region: Museums in Brandenburg open again from Tuesday – Berlin

Queuing for the rapid test

Corona incidence: 45.8 in Roth and 70.8 in Schwabach – Roth, Schwabach, Hilpoltstein

One year pandemic in Burgenland Austria’s third lockdown at a glance

For tests and access controls: City is looking for helpers for...

Erdlager near Hamburg: A typical hiding place in the logic of...

Offices instead of beds? Rumors about the “Hotel de Rome”...

“Better to vaccinate many people once – than a few twice”...