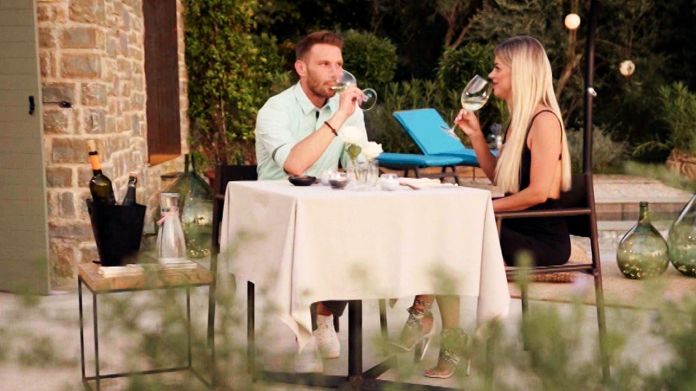 New chance for “First Dates Hotel” candidate Jacqueline. After the dispute in the previous episode, the Cologne woman breaks all the rules. She’s allowed to date the bartender on the show Rocco.

After the scandal last week, she got a new chance: “First Dates Hotel” candidate Jacqueline K. crashed participant Özcan’s date. As it turned out afterwards, the two already knew each other. During a discussion by the pool there was a battle of words.

The  32-year-old then burst into tears. But this week she got another chance.

For the first time in the history of the Vox dome show, a participant was allowed to date one of the employees. After the barkeeper Rocco had consoled the candidate Jacqueline after the incident at the pool, the host Roland Trettl decided that the Cologne and Düsseldorf resident deserved a date.

“First Dates Hotel” bartender is allowed to leave his workplace

“Didn’t go so well last night”, Trettl said to Jacqueline and then asked her: “Would Rocco be something for you?”

The  woman from Cologne immediately replied “yes”. “I never thought you could go on a date with the bartender.” Rocco, who has been single for a year and actually works in Düsseldorf, also took a liking to the prospective driving instructor.

Jacqueline and Rocco got a romantic dinner in the back yard of the “First Dates” hotel in Croatia.

The re was a noticeable crackle between the two. “I’m thrilled,” said the heartthrob in a sonorous voice. “I imagine that could fit.”

The  two talked about loyalty and their idea of ​​relationship, hugging each other at the end of the date. It was clear to both of them:

The y want a second date.

What happened to Jacqueline and Rocco? Unfortunately, the two did not become a couple. Back in Germany, the “love flame went out quickly,” writes the station.

The  hot vacation flirtation did not turn into love. Nevertheless, the two are on friendly terms. “I am very happy to have met Jacqueline,” said Rocco. And the former “Take me out” candidate Jacqueline adds: “It was a great time.”

“He loves it!”: Sweet present from Queen for great-grandson Archie

“The white village” in the Drachengasse theater

Ski World Cup on SRF – Over a million people watched...