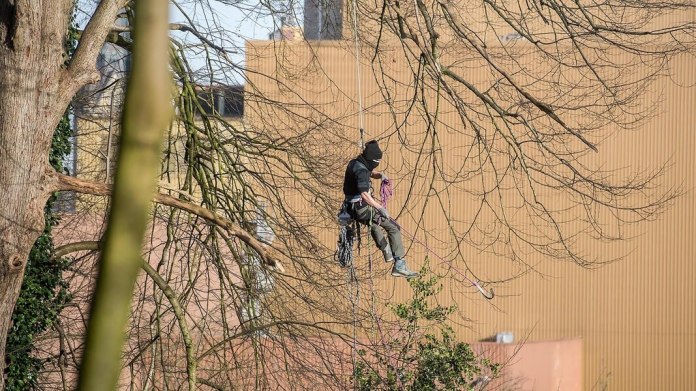 On the intelligence service Twitter the tree occupiers announced that they have left the site. Thus, for the first time since last October, the trees can be felled without interference. All tree houses have been dismantled, the police said. Previously, the evacuation of the occupied Flensburg train station forest, accompanied by protests, was interrupted by the police late on Monday afternoon.

On Monday there were protests against the clearing in many places in Flensburg.

According to their own statements, the squatters demonstrate against the clearing of trees for a new hotel and parking garage. Investors have had building rights since the summer of last year.

Several protests during the day

On Monday, a total of nine demonstrators tried to penetrate the fence into the grounds of the station forest. All were taken into custody. Previously, individual demonstrators had blocked the ZOB intersection for traffic. According to the police, there were repeated small, peaceful protests near the station forest during the day.

The  clearing of bushes and individual trees continued in the meantime, under the eyes of the police.

Sunday: minibus is on fire

The re was apparently an arson attack on Sunday evening. A minibus from the plumbing company of a hotel investor went up in flames near the old high school around 8 p.m. Nothing is known about the exact background.

The  police have started the investigation.

On Sunday evening, however, there was apparently an arson attack on a minibus belonging to the plumbing company by one of the hotel investors. 1 min

As early as January there was an anonymous announcement on the Internet that cars would be set on fire. A large banner across from the Bahnhofswald also carries this message.

The  protesters publish telephone numbers and addresses of companies involved in the clearing.

Mayor Simone Lange (SPD) made it clear on Sunday that the contact and curfew applies to everyone. Protection against infection has priority. Project opponents often call her “forest destroyer” and accuse her of breaking her word because she allegedly promised not to evacuate. At the same time, Lange is criticized because the eviction leads to crowds, the eviction could have taken place earlier and also because she negotiated with the occupiers in the first place.

Private eviction had been stopped

On Sunday, the city administration officially asked the remaining tree house residents to leave the site. Individual occupiers then left voluntarily, others stayed. That’s why the police began to clear the station forest. On Friday, the city stopped hotel investors from clearing the area with private security guards.

The  project opponents argue with nature conservation – such as the protection of bats – and climate protection. Outside the city center, however, a multiple compensation should be created.

Coface – Before the pandemic, companies in CEE countries grew strongly...

City of Paris: Too many women in management positions – fine!...

Juventus Turin: is Sami Khedira returning to the Bundesliga?