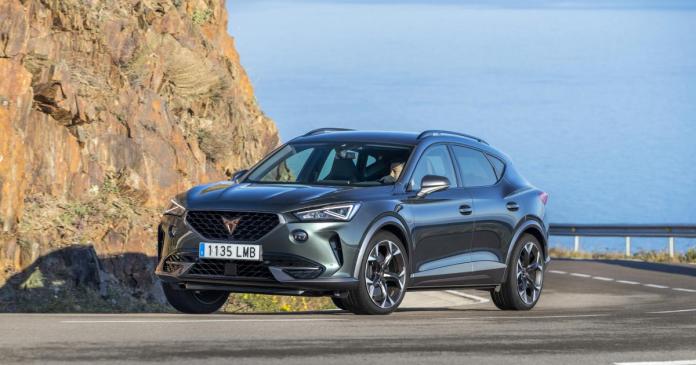 The  technology comes from the group shelf and is already in use at VW Golf or Passat, for example, as well as for the Formentor’s brand brother, the new Cupra Leon.

The  245 HP system output results from the combination of a 1.4-liter petrol engine with an electric motor attached directly to the 6-speed gearbox. This is fed by a high-voltage battery with a capacity of 13 kWh, which weighs an additional 130 kg and ensures a purely electric standard range of the Formentor VZ e-Hybrid of 52 to 55 km.

That’s the theory. A first trip with the Formentor VZ e-Hybrid on home roads should show whether he is right to use the letters VZ in his name. It stands for “veloz”, which means fast in Spanish. In addition, it was necessary to find out whether the extremely positive first impression that the Formentor made with the 310 hp gasoline engine could be confirmed.

The  major differences are not evident in the optics or in the interior (both of which bring a pleasing design impetus to the often little-inspired SUV landscape), but in driving. This is where the Formentor VZ e-Hybrid lives up to its sporty requirements when the battery is sufficiently full so that the 115 hp electric motor can give the 150 hp four-cylinder petrol engine a corresponding support.

The  noted 245 PS system performance is definitely noticeable at full acceleration in the sportiest “Cupra mode” of the drive program selection, but in other driving operations you shouldn’t expect too much from the Formentor VZ e-Hybrid in terms of sportiness. This is not only due to its lower performance compared to the 310 hp petrol engine, but also to the slow-acting 6-speed DSG. And all-wheel drive is not available here either, because the group platform used for plug-in hybrids was not designed for this.

The  bottom line is that there are only 150 HP left for around 1.7 tons of car if the electric motor cannot be used as a booster due to insufficient juice in the battery.

The  Formentor e-Hybrid shows strong sides when it mutates into an electric car and is locally emission-free. In urban and rural traffic it rolls confidently and at the start of the traffic lights it proves to be a brisk short-distance sprinter. What is positive is that the Cupra developers have left their hands off the synthesizer and have not succumbed to the common mania of having to create an artificial engine noise for the electrical operation. It also fits into the positive acoustic picture that the mandatory pedestrian warning tone at walking pace does not sound like a spaceship Enterprise, but rather like a subtle roaring engine.

It is also interesting how Cupra deals with the subject of “recharging the battery while driving”. In addition to the option to save a certain charge level for later, the driver of a Formentor e-Hybrid also has the option of having the battery recharged by the combustion engine. And this up to a desired charge level – converted into range kilometers – or 100 percent.

However, the fact that this setting requires a deeper dive into the submenus of the on-board computer controlled via touchscreen is not necessarily effective in (driving) practice.

Anyone who does not consider the matter to be expedient in terms of the general CO2 reduction aimed for can recharge the 13 kWh battery via cable in 3.5 to 5 hours and in practice it is around 40 km electric range.

The  Cupra Formentor VZ e-Hybrid starts with us in spring and can already be ordered: cost price: from 45,990 €. “Die Sendung mit der Maus” turns 50: That is why Christoph...

Jill Biden and Melania Trump – the contrast couldn’t be greater