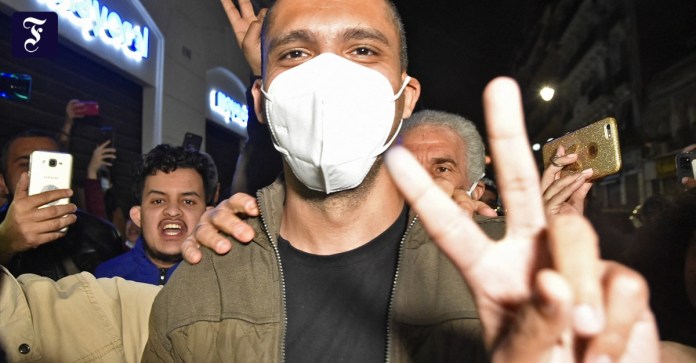 Ssupporters had to wait late into the night before Khaled Drareni was allowed to leave the prison in eastern Algiers.  The  41-year-old journalist is considered the most important symbol of the Algerian protest movement. He had been in custody for eleven months. “We will all be free when all prisoners are free. Your support is proof of our innocence, ”said Drareni at the gates of the Koléa prison. Shortly before the second anniversary of the start of the “Hirak” protest movement, which two years ago swept away the regime of the sick and aged President Abdelaziz Bouteflika, his successor Abdelmadjid Tebboune announced the release of up to 60 opposition members. According to government figures, a total of 33 of them had been at large by Saturday.

Following organizations like Amnesty International and HRW, last December the European Parliament advocated Drareni and all Algerians accused or detained for exercising their right to freedom of expression.

The  co-founder of the news site “Casbah Tribune” and Algeria correspondent for “Reporters Without Borders” and other media was arrested in March 2020 during a demonstration. In the summer he was sentenced to two years’ imprisonment for “endangering national unity” and “illegal assembly”.

The  allegations related to his reports on the Hirak movement, he had almost 150,000 followers on Twitter. Former presidential candidate Rachid Nekkaz has also been released from prison.

The  French-Algerian millionaire Rachid Nekkaz went on a hunger strike. He was accused of having called for arms against representatives of the state and of posting messages against the “national interest” on Facebook. According to the “National Committee for the Liberation of Prisoners”, up to 90 Hirak supporters were in custody at the beginning of the year.

Shortly before the second anniversary of the start of the Hirak protests on Monday, the 75-year-old President Abdelmadjid Tebboune is trying to regain legitimacy among the Algerians. He had previously stayed in Germany for months for treatment because of a corona infection. After his election at the end of 2019, the president first made his critics of Hirak an offer of dialogue. But there was no rapprochement. Instead, the security forces intensified the repression.

In his speech to the nation, Tebboune now not only announced the latest releases.

The  president also promised “fundamental change”, a new government and early parliamentary elections in April. Last November he tried unsuccessfully to make a new political start: the referendum on the reformed constitution turned into a vote of no confidence. 66 percent voted yes, but only a good 23 percent of the voters took part.

The  Hirak had called for a boycott and called for a constituent assembly in which the entire population should participate. After the demonstrators had managed to get Bouteflika and most of the leadership of the old regime to withdraw in April 2019, they no longer want to accept any political compromises on the way to democracy in Algeria.

Is this how to calm the protest movement?

In Algiers there is therefore great skepticism as to whether the protest movement can be calmed down by such conciliatory gestures. Hirak was out on the streets for the last time on March 13, 2020 – it was the 56th Friday of protest, the non-violent “revolution of the smile”, as the hundreds of thousands of demonstrators liked to call it. Since then, public gatherings have been banned because of the corona pandemic, and the Hirak had to withdraw to the Internet. In the past week, however, there were again the first demonstrations in several provincial cities.

Calls are circulating on social networks to demonstrate across the country on Monday.

The  dissatisfaction has grown in the past few months. Because of the permanent political and economic crisis, more and more Algerians are leaving their homeland, which is actually rich in raw materials and which had suffered greatly from the drop in the price of oil even before the Corona. More than 11,000 Algerians came to Spain across the Mediterranean last year.

The re were more than any year before.

Trip to Mesopotamia – Pope’s trip as a premiere for Iraq

Alarm in South Africa: crocodiles break out en masse from the breeding station How the Corona rapid test works for at home – SWR...