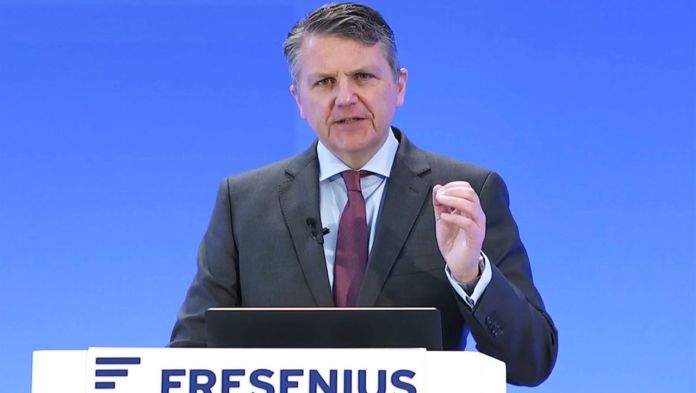 After a profit decline in the corona crisis, the hospital and medical group Fresenius is planning significant cost reductions.  The  DAX company wants to achieve improvements in earnings after taxes and minority interests of at least 100 million euros annually by 2023. This was announced by Fresenius in Bad Homburg.
In 2020 as a whole, sales rose by two percent to 36.3 billion euros.

The  adjusted group result fell, however, by four percent to almost 1.8 billion euros.

“Corona will still present us with some challenges in the current year,” said Fresenius boss Stephan Sturm. “It is all the more important to increase our efficiency and thus improve our cost base.” Fresenius wants to expand growth areas such as digital medical offers, home dialysis for kidney patients, business with fertility clinics and copycat drugs for biotech drugs.

Last year, Germany’s largest private hospital operator with 89 hospitals felt the pandemic. Operations had to be postponed to keep intensive care beds free for corona patients. Since the pandemic was relatively mild, many beds were empty. State aid for hospitals could only reduce the failures.

Since fewer operations were performed, fewer drugs from the liquid medicine subsidiary Fresenius Kabi were used. In the final quarter, Kabi was able to increase its sales slightly, and the hospital business in Germany and Spain also grew significantly.

Hope for the second half of the year

Fresenius continues to expect the pandemic to have a negative impact.

The  group warned that the conditions in key markets would only improve in the second half of the year, pointing to high risks. “However, this is heavily dependent on the rapidly advancing vaccination coverage of the population in these markets.” This year, Fresenius is now expecting a currency-adjusted increase in sales in the low to mid-single-digit percentage range.

The  management confirmed the targets for the adjusted group result, it should remain “at least roughly stable”.

From a financial point of view, the dialysis subsidiary Fresenius Medical Care (FMC) is a drag. Without taking their earnings development into account, the currency-adjusted consolidated earnings should grow in the mid to high single-digit percentage range. In terms of sales, a currency-adjusted increase in the low to mid single-digit percentage range is expected. FMC also announced a package of measures worth millions.

On the stock exchange, the Fresenius and FMC prices changed little on Tuesday morning in a weak market environment. At the beginning of February, FMC had caused a further slide in prices for both securities with a gloomy outlook.

The  shares have not yet recovered from this.

The  Fresenius share has lost more than half of its value since mid-2017.

The  FMC papers, which are also listed in the Dax, have fallen by more than a third since the end of 2017.

Recall: trail mix and almonds with hydrogen cyanide – some markets across Germany affected

Dax with the next record